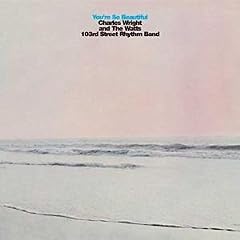 Charles Wright and the Watts 103rd St. Rhythm Band: What Can You Bring Me?
From You’re So Beautiful (Warner Brothers, 1971)

(Dec. 2011: This is another repost/resurrection. First posted in 2007 but original comments were lost. Since I just wrote about this Wright/Watts 103rd song for the Oxford American, it also seemed totally apropos to bring it back. –O.W.)

Original post from ’07: The original song is off the last Watts 103rd album before the group disbanded and it’s also one of the handful of their songs sung by drummer James Gadson instead of Wright himself. Great guitar line and horn reply, right?

The man, Marley Marl, was one of the first to work with that loop for one of Craig G’s unsung masterpieces – “Take the Bait” – which, if I may add, very nicely incorporates Gadson’s falsetto. I’m actually rather surprised that no one seemed to have picked up on it until ATCQ used the same loop (albeit slightly differently) for the posse cut off of The Love Movement.