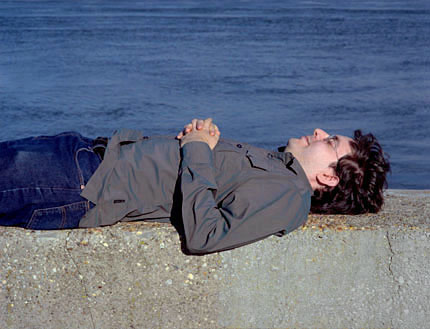 Godchildren of Soul (with General Johnson & Joey Ramone): Rockaway Beach
From Anyone Can Join (Rhino, 1994)

(Editor’s Note: These summer song picks come from Doug Wolk, last seen here plugging some James Brown-related rarities. Wolk has been killing it on the music tip lately…makes you wonder why dude doesn’t have an audioblog of his own…can it be too far away? –O.W.)

There’s the ideal of summer, and then there’s the reality of summer. When you think about the pleasures of summertime, you think of stretching out, sand in your shoes, a cold drink in your hand, cool-looking Ramones shades over your eyes, seagulls circling in the distance, a favorite Carolina beach music mix playing on your headphones. Real summer is rarely that exquisite: there’s sweat and chafing, bug bites, stifling humidity, polyester clothes that don’t let the breeze through. But all you need is one moment of that perfect, unreal, flawlessly relaxing summer to have it fixed in your head forever.

It’s the same with this version of “Rockaway Beach,” recorded by the Godchildren of Soul for their 1994 album Anyone Can Join. In my mind, it’s the perfect summer single–the Ramones’ 1977 punk-pop not-exactly-a-hit-but-a-standard “Rockaway Beach,” re-cast as a beach-music groove (brilliant idea!), and sung by the Chairmen of the Board’s General Johnson (even better!), with Joey Ramone himself chiming in (awesome!) on a bridge that’s not actually in the Ramones’ version but, it seems for a moment, should have been. When I call it up in my mind, it should be blasting out of somebody’s radio about 40 feet away from my beach towel. When I actually listen to it, it’s got some real flaws–the prefab swing of the rhythm section, the slightly plastic horns (I’m not sure they’re actually all real horns), the hints of inappropriate synthesizer, Joey’s hoarse rasp, the way the arrangement ditches the Ramones’ cockeyed riff altogether instead of figuring out how to adapt it somehow. It has the sticky plastic feeling of a beach ball. But having listened to it is great: the idealized version is the one that I can call to mind whenever I want.

There’s nothing wrong with a little beach-ball plastic in the right place, anyway. As Dub Narcotic Sound System’s Calvin Johnson knows (and Kraftwerk, in a totally different way, knew too), if you go far enough into unfunk, you emerge on the other side in the middle of funk. (This is the original 7-inch version of “Shake-A-Puddin'”: the album version on Boot Party is a bit longer, but I love this one better.) Johnson’s only got two carb-crazed notes to sing and sings them both flat, and he’s not exactly convincing when he sings about “that Southern style,” and Larry Butler’s drums couldn’t possibly be more parched, and somehow the whole thing is just freaking amazing, the song I want to hear at rattling volume in the summer as the last bit of sun slips below the horizon and a hint of blessed chill comes into the air and the dance party starts up. Best moment: a minute before the end, when the little ascending half-step scale (on the world’s third-cheapest yard-sale Casio) that Johnson’s been flicking in and out of the mix swims into a fragment of backwards psychedelic guitar that’s like a school of minnows, and then Brian Weber’s feather-fingered organ riff swoops in and swallows everything. –Douglas Wolk