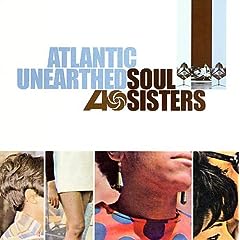 These two volumes collect rare and unreleased songs from the Atlantic vaults – a plum job if there was one. There’s such a wealth of material in searching through the catalog of arguably the biggest soul label in history . However, I’ll be candid: I wasn’t a huge fan of either volume…I think there’s definitely stuff on here that hardcore soul collectors will appreciate and it will open the eyes of newer fans to songs off the beaten path but in terms of the kind of soul I especially like (aesthetically speaking), a lot of this just didn’t move me.

That said, I’m wholly enamored with the Donny Hathaway song. I’m always discovering and appreciating new songs by him and marveling at how me manages to announce his presence with just a two-note hum. You just KNOW a Donny Hathaway song by its sound and feel – it really speaks to the amazing personality he infused into his songs. This track is no exception and that chorus is killing me something wonderful with its chord changes and background vocals. So good. This is one of few songs on the comp that’s never been heard before and god bless ’em for that. (It was originally recorded during the Extension of a Man sessions but wasn’t released for whatever reason.

As for the Laura Lee…well, ya’ll know Linda Lyndell’s “What A Man” is one of my fave songs, especially since I put it up on the Soul Sides Vol. 1 comp so I couldn’t pass up a cover of it. I’m disappointed that the liner notes for the Soul Sisters CD fail to note that Lee’s song is a cover of Lyndell’s original. That aside, I’m tickled at how you have a Black woman covering a White woman, singing in an ostensibly “Black” style. It’s like Usher covering Justin Timberlake or something. (For the record: this is a cool cover but no way is it touching Lyndell’s original).