This is from last night’s direct-to-vinyl performance at Capsule Labs in L.A. Mayer Hawthorne, along with the band Rick, recored live to vinyl in 15 min sets/sides. Most of Mayer’s sets were his songs from A Strange Arrangement but he and The Country did play one new song, presumably from an upcoming release. I’m guessing, based on the chorus, that the song is called “No Strings Attached” and it’s got a nice groove that has an ’80s feel but with ’70s instrumentation. Saying – Mayer’s still slow jam royalty and after a year-plus with only a couple of releases, it’ll be good to hear some new material coming from him.

Update: I’m an idiot. This song’s at least five months old. I totally forgot he put it out while on tour last year. That said, still feeling it. 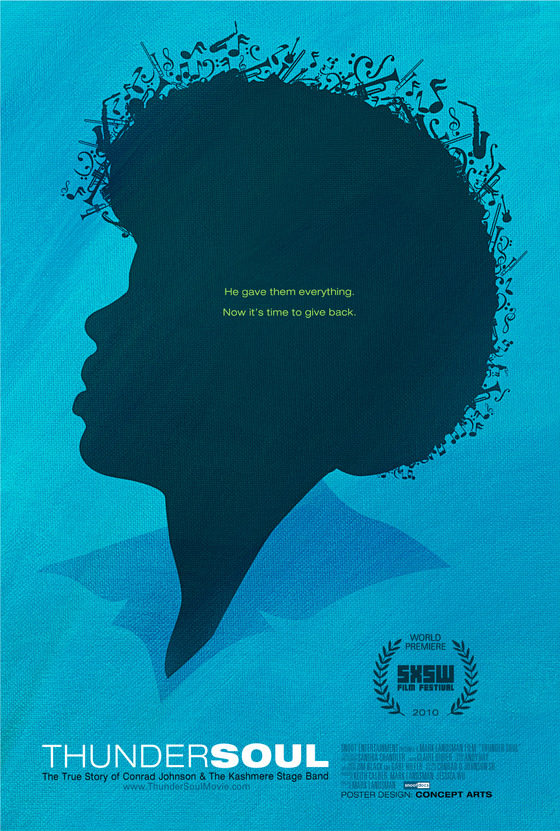 The story of the Kashmere Stage Band is already one of the best I’ve ever known: an all-Black group from Kashmere High School in Houston stuns the world in the 1970s by literally being awarded the title of America’s best high school band. In the process, the KSG recorded a slew of incredible singles and albums that helped sustain its legacy even after their legendary teacher/bandleader Conrad O. Johnson abruptly retired in the late 1970s.

However, the KSG story goes beyond just the handful of holy grail records they left behind. This much is made poignantly clear in the new documentary Thunder Soul which I caught last night as part of the L.A. Film Festival.

The KSG had an incredibly transformative impact on the high school community and especially the musicians in the band who saw Johnson as mentor, counselor and father. The film traces how many of the original band alumni regroup – 30 years later – to play a concert for Johnson (then well into his 90s and in poor health). Along the way, Thunder Soul rolls back into the history of the group but also does the equally compelling job of showing how their legacy continues to impact people, decades later.

This was capped by the fact that, after the screening, the members of the Kashmere Alumni Stage Band came out to perform a complete set of “Kashmere classics,” including a wickedly funky cover of “Shaft” and their signature “Kashmere” theme song. It’s hard to properly capture how incredible this was but let me try:

What I thought was most affecting was how Thunder Soul doesn’t simply rely on a boilerplate “glory days” fetishizing of youth. It could have easily gone in that direction, ala “look how great we all were.” Instead, I think the film subtly, but surely, is more interested in portraying how the lessons of youth (literally, in this case, music lessons) endure into middle-aged adulthood. The members of the KSB are well into their 40s and 50s now but when they get together and play, you realize how powerful a legacy was laid upon them by Johnson and the KSB experience. There’s a richness to memory and history that only becomes revealed as one ages and Thunder Soul understands that well.

Most of all, I consider it an incredible privilege to have seen the band play. It was big of the filmmakers and festival to bring them out (help with donations for their travel fund!) and it added a touching and just-plain-awesome capstone to the evening’s event. Here’s the band performing my favorite of theirs (what else but…): “Kashmere.”

(If you need to get familiar with the KSB’s music, don’t forget about the Texas Thunder Soul comp on CD and LP).

We know you love a great soul set. So if you live in the areas around Chicago, Pontiac (MI), Columbus (OH), Washington, D.C., New York City, or Brooklyn, Numero is bringing its Eccentric Soul Revue tour to you. Even if you DON’T live near one of those places, schedule a getaway (even if it’s by yourself). From the looks of this trailer, the show looks absolutely fantastic.

Motown had one, so did Stax. Three soul-deep acts and one smoking hot band to back them up. The triple-header of R&B: the soul revue. Once a mainstay of theaters, gymnasiums and VFW halls everywhere, the soul revue ultimately vanished in the late seventies as recorded sound pushed live performance out of the limelight and onto car stereos and refrigerator-sized boom boxes. The performers returned to their day jobs and the world was the poorer for it.

That is, until April 4th, 2009, when your Numero Group mounted the first Eccentric Soul Revue, packing Chicago’s Park West Theater with soul-hungry acolytes, satisfying them and then some with the real thing: a 17-piece band backing The Notations, Renaldo Domino, The Final Solution, Nate Evans, and Syl Johnson, putting on a show that combined 70s slick with revival-meeting fervor.

It was a magical evening, as the past lived and breathed and got on down, right here in the present. Those in attendance went home that night knowing they’d seen something that just wasnt done anymore. And wanting more. If you live in Columbus, Ohio, New York, Brooklyn, or Washington D.C., the wait and the want is over. The Numero Group is taking this show on the road.

Eccentric Soul Revue hits the East Coast in November with the totally explosive Syl Johnson, the silky smooth Notations, and the man with the voice like Domino sugar, Renaldo Domino, plus special guests, a slide show, and an autograph line.

There is absolutely nothing else like The Eccentric Soul Revue. A ticket is a time machine. Be there. As promised, one of my two NPR pieces on Lee Fields. This music list includes music I didn’t include in my post from the other week.

Just picked this up at the Groove Merchant over the weekend – supposedly Fields very first single, released back in ’69. I’m really feeling “Bewildered” especially – so Southern soul!

By the way, if you’re in New York and need something to do tonight…. But hey, if you don’t live in NY, you can still listen in live.

Speaking of which, the audio for this won’t be up until 4pm PST, but here’s my review of the new Lee Fields album for NPR’s All Things Considered. For Blossom Dearie fans in the Bay Area, Jacqui Naylor is doing a tribute concert at Yoshi’s:

Bummer news – the Axelrod anchor leg of the incredible Timeless series has been called off.

You know how we do!

Soul Sides has three pairs of tickets to give away. If you slept on the previous two Timeless shows…you wack! Don’t make it a hat trick and miss out on Email us with the subject line “Verocai giveaway”. Make sure to include your full name.

I confess, I don’t know a ton about Verocai except that I always associate him, rightly or wrongly, with Brazil’s Tropicalia movement of the late 1960s which was both an intense period of both cultural and political collisions and musical evolution (check out Brutality Garden if you’re really interested).

Verocai’s 1972 album on Continental is a straight up Brazilian holy grail LP and personally, if you listen to how intricate his arrangements are, how brilliant his fusions of Brazilian and American styles come together here, you can understand why people jones for this album so badly.

And he’s going to be playing in LA with a 30 piece orchestra? No brainer. Last night’s “Suite for Ma Dukes” performance (part of the Timeless Series) was a really beautiful event. Even though I arrived halfway through the first set (which, I think, was mostly a live performance of what appears on the EP), I could already tell the evening was going to be special.

What really works about the whole conceit is that part of what made J-Dilla beats so memorable was his understanding of musical and emotional texture. It was never just about a loop or riff or beat (though, of course, he was gifted in working with those); it was about what those sounds could evoke. And in the hands of three dozen musicians, plus the energetic – even theatric – conducting of Miguel Atwood-Ferguson – I think they did a beautiful job of really capturing, expressing and transforming some of the emotional range that Dilla played with in his music. Most of what was played last night were not attempts at recreations, but rather flights of musical imagination inspired by Jay Dee’s works and to me, that was all the more meaningful as a tribute.

And there were many people who loved Dilla in the mix that night – from his mother, Maureen Yancey, to his brother, Illa J, to his former roomie and collaborator Common, to vocalists Bilal, Amp Fiddler and Dwele, to Talib Kweli and De La Soul’s Posdnuos (the latter two performed over a recreation of the “Stakes Is High” beat).

I have to say – there’s two more shows in the Timeless series, one with Brazil’s Arthur Verocai, the other with LA’s own David Axelrod – but somehow, I can’t imagine anything really topping tonight…not b/c the other men are incapable of transcendent moments of musical composition or performance but I just think, for the audience that the series is aiming at, for the sheer level of creative challenge that Atwood-Ferguson and Carlos Niño rose to to make this music work. to the sheer amount of love reverberating through the room last night…this was something that went beyond the music in honoring and celebrating Dilla.

And with that, I end with one of my favorite Jay Dee beats, one that will never age or fade. Update (2/19): As promised, we have tickets to give away for the “Suite for Ma Dukes” show, coming up this Sunday night.

I’ll draw three winners at random from those who email me, with the subject line “Ma Dukes Contest”. Good luck!

Next in the Timeless series, following on Mulatu Astake’s performance from the other week, is “Suite for Ma Dukes,” a four-part suite celebrating the career and life of J-Dilla (whose birthday would have been tomorrow) by Carlos Niño & Miguel Atwood-Ferguson.

I admit, I was a bit skeptical as to what this would sound like – the idea of having a 36 piece orchestra playing compositions inspired by J-Dilla felt like it could be an aesthetic mish-mash, like when bands try to recreate hip-hop beats. But I was very pleasantly moved by the songs I heard from the EP which, far from trying to work in a hip-hop vein, are fully fleshed out jazz compositions that borrow aspects of Dilla’s tracks without being strictly beholden to them (or their original samples).

Here’s some streaming audio of one of the Suite’s best songs:

The EP itself is currently available on iTunes and will be released on LP/CD in April (pre-order here).

The performance will be on February 22nd (Sunday night) at the Luckman Center (Cal State LA campus). I should have some tickets to give away for it as we get closer to the date.

…and you’re NOT going to one of these, you need to ask yourself: what’s wrong with me?

UPDATE: As it turns out, we have three pairs of tickets to giveaway for this Sunday. Short notice but better late than never!

To win a pair of tickets:

Listen to this song:

…and answer this question: Which Mulatu Astatke song is being sampled and what album is it from?

Send your answers in an email, subject titled “Mulatu contest”, to me. Three random winners will be chosen from all correct answers by noontime tomorrow.