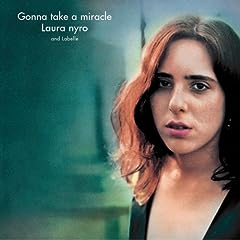 I had an Almost Famous moment earlier this week and alas, it did not involve anyone resembling a young Kate Hudson.

I was in a commuter plane from Chicago to Champaign, in the middle of a rain storm, and we hit a long patch of turbulence where it felt like we lost altitude with every bump. I’m not, by nature, a paranoid person and I generally am very zen about flying but for whatever reason, this had me a bit spooked, long enough to start contemplating my mortality.

Of course, being me, I also thought, “wait, so what will my last song be?” And at the time, I was listening to the Laura Nyro/Labelle album, Gonna Take a Miracle and given how calming the album was, I felt, “well, if I’m going to out go out listening to Laura and Labelle…that’s ok by me.”

In all seriousness, I can’t believe I slept on this album for so long (esp. since I was actually posting about it a year ago but I didn’t bother to actually check out the album at the time.

It’s good. I mean really good. I mean awesomely great. And it strikes me too – it’s a retro-soul album of sorts, an homage to the girl groups and crossover R&B/pop hits of the mid-1960s. Whatever the case, it is lovely.

Since I just posted the title track the other week, I went with just one more song, this time their cover of Martha Reeves’ “Jimmy Mack” which is so ebullient and cheery, it even makes a really bad plane trip seem a bit more bearable. To be honest, it was incredibly hard to figure out what to post here – “The Bells” was also in leading contention as was “I Met Him On A Sunday.” In the end, it doesn’t really matter – anything off of here wins.

Once again, I recommend people read Mark Anthony Neal’s essay on this album.

And I absolutely recommend you add this album to your collection as soon as possible.