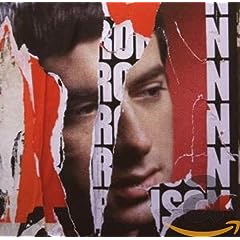 Version is already available in the UK (as of last week) but won’t be coming state-side for a couple of months. The conceit of the album is very simple: take a smattering of mostly UK (and a few American) alt-rock songs and give it Ronson’s customized retro-funk/soul twist. As someone who’s all into covers (obviously), I take special interest in a project like this since it’s both all about covers and moreover, an interesting experiment in pop music making for someone with Ronson’s current cache amongst the musically hip (*cough cough* soulful and soulless alike).

I’ll be writing a formal review of the album down the road so I’ll spare the same approach here except to say, for an album of covers, the source material is hardly obvious to anyone outside the world of UK/US alt-rock. This doesn’t inherently hurt the album – the songs can stand on their own, especially as “Valerie” attests too – without one knowing what the O.G. sounds like but it does raise a question of who the intended audience is here. Do Radiohead or Kaiser Chief fans want to hear familiar songs remade as if by Fred Wesley and the Horny Horns? Or likewise, do QSO/Daptone fans want to hear that sound applied to the Smiths with Daniel Merryweather singing? (To answer the latter – probably not. The song is pretty horrid on both levels).

For what works, I have to say – Winehouse’s version of “Valerie” is an instant winner. She’s already performed this during her recent mini-tour and there’s an acoustic version that folks have been circulating. The song’s genealogy is under some dispute – the song is mostly associated with the Zutons (if you just asked, “who are the Zutons?” you’re not alone) but others claim the song originally was on a demo by the Jam but not got released. As my wife said, “it sounds very Paul Weller,” (upon which my friend quipped, “except bad.” Ouch). History aside, it’s a very catchy song and if you already like Amy (as clearly, many of my readers do), you’ll like this and if you don’t know her, it’s not a bad introduction to Ms. Winehouse’s style.

“Just” appeared earlier on an album of all Radiohead covers and I can’t say I’m mad at this at all (same goes for that Cuban remake of “High and Dry” from last year). The production is a bit overcooked here for my tastes – it’s fun but could have stood to be stripped down more – but I can’t say I’m resistant to its charms.

As for the cover of Britney Spears’ “Toxic” on here by Ol Dirty Bastard and Tiggers…uh, um…eh…let’s just that one alone. Very, very alone.