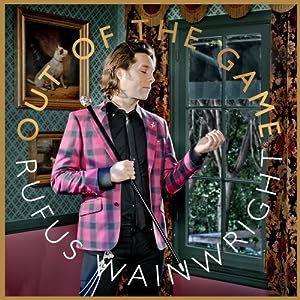 It may not be obvious but I’m a big Rufus Wainwright fan. Mostly. I add that qualifier only because after obsessively listening to his first three albums in the early ’00s, I more or less lost tabs on him for the remainder of the decade, including at least 2-3 studio albums that – for reasons I can’t even explain – totally missed my radar.

So maybe it’s only appropriate that I’d be rediscovering him on his latest album, Out of the Game…given that this effort is produced by Mark Ronson and features many of the Daptone players on. It’s definitely not an intuitive partnership (which isn’t a bad thing) and it also doesn’t sound like what you might expect it to (also not necessarily a bad thing).

In a way, Out of the Game does have a retro appeal…but not drawn from the ’60s. There’s much on this album that’s thoroughly drenched in ’70s rock: Fleetwood Mac/Eagles, and E.L.O. Rufus has described this as his most “pop” album to date which I think is half-true…if the album had come out in 1975 as opposed to, you know, now. It’s not like Ronson and company are trying to make him sound like LMFAO.

Ironically, one of my least favorite songs on the album is the one that sounds most “Ronson/Daptone-y”, “Perfect Man,” and for me, it’s because the uptempo, snappy funk style doesn’t mesh with Rufus’s more baroque vocal style. But that aside, there’s much on here I adore, no song more than “Respectable Dive”:

Maybe it’s because I’ve had my own “Respectable Dive” moments (including with the woman now my wife). Maybe it’s because I like the ambiguity of the verses.1 Maybe it’s because it’s slow, haunting and gorgeous, like all of Rufus’s best ballads. Regardless, it’s one of my favorite Rufus songs of all time (which is saying a lot). He just has a remarkable gift for ballads with that instrument of his and while it may be an acquired taste…call me one of the acquirers.

Plus…he recorded a song about Rashida Jones.2 And he recorded a lovely tune for his daughter that doubles as an elegy for his late mother (see below)…which you wouldn’t think would be so affective if not for the subtle turn in the “last act” of the song. I hate being emotionally manipulated like that but I admire the craft.

So yeah, I’m feeling the album and glad to have finally revisited him. Hope you do too.
Rufus Wainwright: Out of the Game