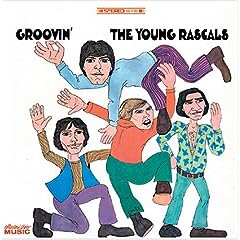 Editor’s Note: This guest post comes from Scott Homewood who wanted to muse on the magic of the (Young) Rascals, one of more prominent blue-eyed soul groups that emerged during the mid/late 1960s. –O.W.

When someone brings up the word “soul” pertaining to music, I immediately flash back to the first time I heard “Groovin'” by The (Young) Rascals. Let me tell you a little something: if you have not heard their stuff, you are missing out on some of the most soulful music you will ever hear. Some of you might remember the band from the mid-’60’s when they still had the word “Young” as part of their name (as they did when “Groovin'” became a hit) before they shed it in defiance of their record company like a snake shedding it’s old skin to become shiny and new again, just as they later shed their “pop band” persona to pursue some more esoteric groove-based music. But, sadly, if you remember the band at all you probably remember the band most as an “oldies” station staple thanks to their hits “You Better Run” (yeah, they did it way before Pat Benatar and way better, too, I might add), “It’s a Beautiful Morning”, the aforementioned “Groovin'”, “People Got To Be Free” and many, many others. Based around the swirling keyboards and soul-drenched vocals of Felix Cavaliere, the remaining members (vocalist/percussionist Eddie Brigati, guitarist Gene Cornish and drummer Dino Danelli) more than held their own.
CONTINUE READING…

While I find most people consider their music as part of the “rock” genre, I have always considered their some of the deepest soul music I have ever heard. Even before they started making concept albums towards the end of their career, their music was steeped in it, though in their early days it was more R&B based. Later on though, after they said screw off to pandering for hits, they could’ve given the Average White Band some lessons in cutting the cake. In fact, to my ears, their last two or three albums compete with classics like Stevie Wonder’s Innervisions and Marvin Gaye’s Hear, My Dear as latter-day soul masterpieces. But then, I have always heard the soul in their sound, right back to the day where their hit “Groovin'” dug its’ groove down deep into my soul. To listen as the band evolves from their R&B roots to their later sound is aurally mesmerizing and well worth whatever it takes to by their albums, especially since they have all recently been reissued.

I first heard the song about ten years after it was first released when sitting around the dining room table at my brother Robert’s new house as he and his wife Marie unpacked their belongings and started to settle into their new environment. This was in January of 1977 and they had moved from their duplex apartment across town to a new place just across the street from where our parents lived. I was overjoyed as I idolized my older brother. He was a music freak and he had turned me into one as well. All my musical heroes like James Brown, Chuck Berry, Solomon Burke, Jimmy Reed and The Rolling Stones were recommended by my brother, who thankfully knew quality when he heard it. He once got me started on a major blues kick when he casually remarked one day that he liked B. B. King and Muddy Waters. Weird names to me, I started saving my allowance to buy any of their albums I could get my hands on. Muddy Waters? Is that near where the Howlin’ Wolves hang out?

Anyway, as I watched them set up their new house (and helped a little), eventually the record player was removed from the cardboard box used for the move and watched as it was set up on their silver-shiny metal entertainment center. Soon the albums were also unpacked as well as a large stack of 45’s I had given to my brother as a Christmas present a year before. I had acquired the vinyl booty at a garage sale from an older couple who noticed me salivating over all them and said I could have them for nothing. Of course, before I gave them to my brother I had made sure to take out the James Brown and Rolling Stones singles I wanted for myself. As my brother’s wife sat the box of singles on the table, he noticed them and thought it would be cool to play some. He asked his wife and I to pick whichever ones we wanted to hear. I had already taken out all the ones I knew and liked before giving them to him so I had no idea what any of them sounded like and, thus, deferred to his wife, who excitedly picked out The (Young) Rascals’ “Groovin'”. Not knowing the song or the band, I said to myself “whatever” and prepared to get back to helping my brother unpack.

The gentle sound of the bongos beating and the birds chirping immediately caught my ear as if someone had grabbed my head and twisted it Exorcist-like towards the speakers. Up to that point I could not remember a song with an introduction anywhere near as compelling. Then, as the song flowed, I knew I was hearing something special. Something that was about to change my life. It was nothing like any of the Top 40 hits I was used to hearing on the AM stations. It wasn’t a throwaway novelty or glammy, pop rock – it was pure soul, but not like the teen-pop Motown songs everyone else liked but that I felt were too obvious and dumbed-down. This shit was DEEP. This was a song filled with passion, love and heart – it seemed more mature and meaningful than most of the rock songs of the time that I was used to hearing. And I’ve later gone back and listened extensively to the music around when the song was a hit, and there’s not too much that can compare. It was a slice of life, made by those who seemed to have lived a little of one, unlike myself who was still in school and hoping to experience some of the things The Rascal’s lead singer Felix Cavaliere was singing in his song.

Though the song’s lyrical thrust was simple on the surface – being about the lead character spending a leisurely Sunday with his girlfriend – what the song implied was ten times more powerful than what it said outright. The song’s lead character and his girlfriend were deeply in love, led busy lives during the week and looked forward to their special time on Sunday afternoons when they could relax and be together. When you’re a kid and still trying to figure out where you belong, how and how much to love someone else, and how to act in a relationship – this was powerful stuff. Stuff that spoke volumes about what it was like to be an adult in a relationship. The song’s simplicity yet earnestness is the charm, its sense of giving so unalloyed. At it’s core the song is just a slice of life – but it implies much and says volumes to those just starting to really live. To me, this shows deep, deep soulfulness. Sure, the bass doesn’t make your booty feel like shaking and there ain’t a funky horn section led by Fred Wesley, but to me, this song and this band, epitomize what soul is about – deep relationships. Sure, later on I figured out “groovin'” could stand for “fucking” – I mean, check this lyric: “life could be ecstasy, you and me endlessly…groovin'” – but at that point what I thought it meant was just as important to me. Everything the Rascals were and what they became is forever captured in this song. The early innocense and the later explorations of soul and jazz. Though my other favorite part of The Rascal’s sound, Gene Cornish’s grinding rhythm guitar breaks, was absent in favor of a softer tone, everything you ever wanted to know about The Rascals is contained in this song.

Everyone and their brother should know this song. Thankfully, mine did, thanks to his wife, who I found out had been the one to turn him on to The Rascals.

The Rascals would eventually get out of the pop song business and explore full-on soul and jazz with their later albums. Rambling masterworks, these way experimental albums would embrace far-reaching concepts and themes far more mature than most “pop” acts, with the music always based on Cavaliere’s soulful keyboard work and husky vocals. Though the band broke up by 1974, the Rascals’ music still resonates today and provides many cool grooves to dance to, grooves I can listen to over and over now that the band’s long-neglected back catalog is available again.