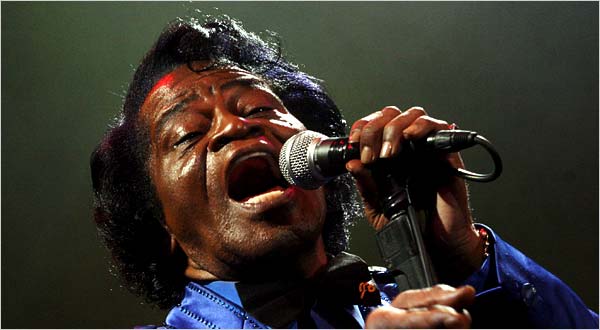 James Brown: Give It Up Or Turn It Loose (Remix)
From In the Jungle Groove (Polydor, 1986)

I’m genuinely honored that people expect the site to have something poignant to say about James Brown but honestly, I don’t really have much to add besides 1) what I’ve already noted and 2) what other writers I respect have had to say about it. Maybe at some far later point, I’ll have an epiphany to share but for now, I think there’s enough very qualified voices out there who can breakdown everything you’ve wanted to know about his career and legacy without me having to reinvent the wheel on that one.

Instead, I want to simply share a few songs that have always been my favorites out of his catalog – and there are many, so expect this to be in the first in a long series.

What’s remarkable about the two songs I have here is that neither ever saw a proper release until the 1980s and ’90s even though, to me, they are far superior versions of songs that otherwise did appear as either commercial released singles or album cuts in the 1970s. The “Original Rock Version” of “Talkin’ Loud and Saying Nothin'” was an unreleased King promo (still available on 7″ for the intrepid) from 1970. It was recorded with producer Dave Matthews as part of the same sessions that eventually produced Sho Is Funky Down Here (often considered one of the black sheep of Brown’s catalog, though people said the same thing about Gettin’ Down To it and Soul On Top and I think history has vindicated both are marvelous examples of Brown’s creativity and versatility). That album was Brown’s attempt to foray into “rock” (though not like any rock music you could really compare it to) which explains the rougher, more fuzzed out sound of this version of the song. Brown eventually did release “Talkin’ Loud” in 1972 but it was a different version, recorded in 1970 with the Pacesetters’ era of the JBs).

Not to take anything away from that hit version (which was a monster smash for Brown) but I prefer the original version far, far more. Start with that raw guitar and the, “how ya like me now?” taunt that begin the song and then dig into the seams of what almost sounds like a garage funk rendition of the song’s now familiar rhythms and lyrics. The JBs version sounds practically genteel in comparison to the rough edges of the original. It’s possibly my favorite Brown single to play out when I spin – it just sounds incredible to me.

Same goes for the six minute version of “Give It Up Or Turn It Loose,” possibly the most explosive funk groove that Brown ever laid out (though, in all fairness, there’s many songs that could vie for that title). The song existed, in a sense, on the Sex Machine album but only as part of a medley and with overdubbed audience noise on it. This version (which again, is NOT like the actual commercial single) didn’t receive a proper release until 1986 where it helped anchor the much-lauded In the Jungle Groove compilation, an anthology that went a long, long, long way to re-establishing Brown’s centrality in the evolution of Black (and just plain American) music given how it became the blueprint for hip-hop’s early sampling era.

In any case, this version of “Give It Up” is molten hot from jump. It’s not wildly different in basic arrangement from the commercial version though it exclusively features a B3 Hammond organ. But whereas the commercial release is more stately and tightly wound, the Jungle Groove version really does turn things loose with a more expansive sound and energetic pulse. What makes it so insanely good though is the bridge which drops in around 4:20 where Brown strips things down into a simple conga beat and handclaps and exhorts you to: “clap your hands/stomp your feet/in the jungle brother” and follows this through for a few bars until yelling, “CLYDE!” and here comes Stubblefield on one of the greatest breaks in funk history before another four bars rolls by and here’s James’ yelling, “BOOTSY!” and Collins lays in with a mean bassline.

I liked this break so much, I made an edit of it so I could DJ with just that portion of the song through the track’s end. It doesn’t do proper justice to the entire song but think of it as a quick treat instead.

By the way, if you don’t own In the Jungle Groove, it is, quite easily, the first album I’d recommend to anyone who wants to start digging into Brown’s catalog. That’s just my personal opinion and there will no doubt be other Brown fans who would suggest instead going with something far earlier (and hey, we’ll get there) but for my generation, In the Jungle Groove is the Brown we first came to know (after *cough cough* conveniently forgetting “Living In America”) and 20 years later, that anthology is still one of the hardest f***ing collections of music I know out there.

WFMU’s Beware of the Blog has an excellent round-up of JB coverage ’round the WWW.

WFMU’s “Music to Spazz By” show also had a three-hour dedication to the music of JB available in streaming audio.

One thought on “THROW IT DOWN FOR JAMES BROWN”