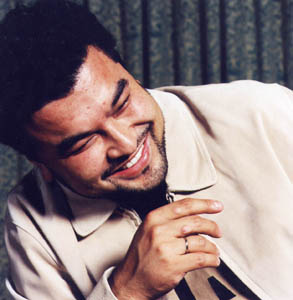 2005 is about to jump off, fast and furious. The Game’s had an easy January – his CD’s been the only major release so far and 50’s not due until late March. Between now and then however, there’s a rush of noteworthy releases due up. I snippet-ized a sampling from a quartet of albums I’m personally looking forward to, let’s see what discussions spark from here on out…

1. I’ve been sitting with Edan’s new CD for a few weeks and have been loving every moment. Maybe it’s an nostalgic impulse on my part – after all, Edan lionizes the ’88 fast rap era that I’m a fan of too and his aesthetic mastery – lyrically and musically – of that time is masterful, to the point of obsessiveness. Do people find him a little backpackerish? Probably but this new album breaks out of that throwback mode with an exciting, aggressive assortment of psyche-inspired tracks. The mood on Beauty and Beat is decidedly dark and a touch sinister: think Kool G Rap rather than Kwame. I pulled a track feat. Percee P, the fast rap legend whose career has most decidedly entered into its second (or is it third?) act. There’s supposedly a Cut Chemist remix of this somewhere out there that’s habanero hot.

2. What I appreciate about Lyrics Born is how he just goes ahead and does whatever he wants to artistically, no matter how unconventional it may seem. To me, he’s one of the last few iconoclasts left in hip-hop who still has enough talent to stay relevent. For example, he decided to make this remix album on a whim but once he was committed, he went the full-length: bringing in a host of different producers, including the Lifesavas’ Jumbo to Germany’s Poets of Rhythm to the Bay Area’s very own Dan the Automator. Dan handles the track on “I’m Just Raw,” one of four completely new songs offered on Same !@#$ – it’s a straight braggadocio cut in the tradition of another Dan/LB pairing from a few years back: “Always Fine Tunin.” (The CD also brings back DJ Spinna’s excellent “I Changed My Mind Remix,” from 2000 as well.) Bottomline: I respect LB’s hustle – he really does the Bay proud.

3. I was probably the only pop music blogger who didn’t put “Galang” on their top 10 list…not because I didn’t like it, but I was slow to get around to listening to it. Candidly, so far, I find M.I.A.’s back story to be the main draw, which is no disrespect to her music, but c’mon – a Sri Lankan child refugee who lands in England, sports a Cockney accent and sings/raps over apocalyptic, electro-destructo beats? And dates Diplo? Not to sound all grrrl power but I’d love to go to a show headlining her, Dizzee Rascal and The Streets and watch her wipe the floor with the whole lot. Frankly, I’m not next level enough of a music critic to know to call this grime, neo-electro, or whatever – I’m just enjoying the sheer bombasticness of it all.

4. On that note, it sounds like M.I.A.’s been cribbing notes off of Prefuse 73’s smash-distintegrate-rebuild-smash production style. I’m sure Jacques Attali must have had some prescient vision of Prefuse when he wrote Noise since 73’s music toes that razor line towards a distortion to static but subliminates a range of rhythms underneath everything he does. In all fairness, it’s not like I live and die for his sound – gimme a straight drum break loop any ol’ day (see below) – but I do appreciate how he’s steadily evolving his sound through each new release. Surrounded By Silence is his most ambitious to date in terms of working with other artists. At last count, he had at least 13 guests on the album, including a track with both Ghostface and El-P, plus “Just The Thought,” a Wu-Tang affair featuring Masta Killa and the GZA. The pairing makes a lot of sense if you think about the ways in which the RZA has played with distorted, dusted out sonics himself.

This song’s already making the blog rounds (read the comments on that post for more hilarity) but at the risk of being redundant let me state the following:

1) I was apparently the only person who actually thought Electric Circus was an enjoyable, imaginative album. Best thing Common ever made? Hell no. But as boring or mark-missing as something like The New Danger or Beautiful Struggle? Uh uh.

This song, along with “The Food” from ’04, pushes Be to the very top of my most-anticipated release list, including over Kanye’s Late Registration.

2) Speaking of West, I’ve mostly found him – despite his steadily overbearing god complex – to be a refreshing presence in the rap game but in general, his productions are starting to thin out, probably from being over taxed. Two years ago, did Kanye have any wack beats? I can’t think of too many off the dome but in the last few months, he seems to be phoning in a few of his efforts (The Game’s “Dreams” comes to mind and let’s please not talk about that b.s. he did for Jin).

This said – Kanye comes back diamond hard with “Corners.” When’s the last time you can remember a West production that kicks off with a drum break, let alone something as flinty as this one? Was he offended when Just Blaze said on “Church For Thugs:” “no more hand claps, please?” Did he decide to go back to the lab and pull out this grungy, stripped down, nails-in-a-baseball-bat of a beat? It’s not hungry – it’s damn near starving to be heard, to be pumped out of trunks from Cabrini Greens to Red Hook.

Aside: me and Hua were wondering aloud if Just Blaze and Kanye West had beef, who’d walk away as the last man standing. Provided, West rocks Jesus piece ice these days but Blaze managed to make Fab sound talented on “Breathe.” I think the latter qualifies as the more impressive feat.

3) Just because Common wouldn’t be Common without a little touch of corniness, the song also features Umar Bin Hassan from the Last Poets. I’m not as annoyed by his presence as others are…he’s not nearly as grating as Olu Dara on “Bridging the Gap,” and I still have fondness for Hassan’s cameo on Ed O.G.’s slept-on, “Love Come and Goes.”

4) Unrelated quick question: do we like Jay-Z’s guest verse on the “Drop It Like It’s Hot” remix or not? Props for dissing R. Kelly but all that shizow, nizow flow got to be a bit much, no?