Ken Boothe: Down By the River
From Everything I Own (Wildflower, 1974)

For a limited time only, I decided to recap the five songs I sent over to Tofu Hut. I won’t bother to list all the biographical info since I already did it over at TH (start reading here for the full postings, plus John’s replies).

Charles May and Annette May Thomas: I’ll Keep My Baby Warm
From 7″ (Gospel Truth, 1973)

We admit: Soul Sides is not that up on our gospel but we managed to dig out two favorites that have long been in rotation ’round here. The first comes from Los Angeles’ Charles May and Annette May Thomas who recorded for the Stax-subsidary label, Gospel Truth. I can’t say enough about “Keep My Baby Warm,” which is just so damn soulful that it’s easy to forget that the allegory here might well be that “baby = Jesus” (at least that’s how I read it). You don’t really need to know that context though – like many gospel songs of the ’70s, it works in both secular and religious contexts.

Sorry for the secrecy but the second song, “No One But the Lord,” needs to remain in incognito status, at least for now (there’s enough heads out there who already know about this Bay Area gospel album in any case). Again, this is so funky that if not for the obvious Christian-inspired hook, this could pass for just a solid soul song. In fact, just change “the Lord” to “my man” and you can see what I mean.

The Soul Stirrers: He Knows How Much We Can Bear
Available on He’s My Rock.

Today brings the end of the Soul Hut collaboration. I graced Tofu Hut with one of my all-time favorite covers: “Love and Happiness” by Monty Alexander. John, in turn, gave us this song by The Soul Stirrers, along with these comments:“We end Soul Hut with a track that’s near and dear to my heart and one with a message that grants me succor through hard times.

The Soul Stirrers are best remembered today as being the matrix from which Sam Cooke sprung; this recording presages that development by a good many years. The strong bass is courtesy of J.J. Farley, the honeyed lead by Robert Harris.

Don’t let the surface noise bug you; think of it as a prestigious member of the band that only the grandest and oldest groups can claim.

Hustle over to Tuwa’s Shanty and see if you can find a few more Soul Stirrers tracks.

Read this bio on the Soul Stirrers.”

Soul Sides replies:
Alas, the static is pretty damn heavy on this and I found it to be more of a distraction than I would have liked. It’s also a rather muted song: I like the harmonizing but I guess after the previous whoomp provided in the other songs, this one was the quiet close instead of a rousing, crashing finish.

But wait…it’s not over yet! Wait for the Soul Hut Recap and Bonus Round, coming soon. We’re actually backed up over here – Johnnie Taylor, Leon Spencer, Gene Russell and more, all waiting in queue. 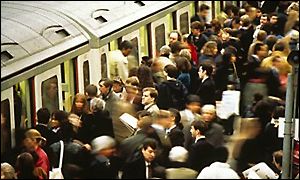 It’s the penultimate (I’ve always wanted to use that word) day of the Soul Hut collabo. Tofu Hut has my offering: a spanktacular cover of “Down By the River” done by Ken Boothe.

I love the old gospel tricks these guys invoke: onomatopoetic train whistles and human orchestra clang on the tracks amidst the singing; the constant and gradual build in pace; the beautifully sustained shouts and cries of glory; unmatched harmony.

The P-Vine import CDs that many of these tracks hail from are virtually incomparable in terms of quality but they’re a bit pricey and a pain in the ass to find. Good luck on the hunt and if anybody finds a reliable online export source other than Amazon, please let me know about them.

Kick ass. Our favorite song from Tofu Hut – this one is just so damn soulful on every level I can imagine: the acapella arrangement recalls the gospel roots of Aretha Franklin, the train-like sounds the Singers dole out are just straight up bonkers, and the sense of rhythm they have is fantastic.

The Brewsteraires of Memphis: So Glad
Available on It’s Amazing: the Glorious Female Gospel 1947-1951

For Day Three of Soul Hut, I dropped off a copy of “Tequila” as done by Bill Black’s Combo. Tofu Hut came with the Brewsteraries of Memphis and John offered the following thoughts:

I’m sure all the vinyl junkies in the crowd will appreciate the spiderweb of surface noise on this track; it has the dusty sound of authenticity when it surfs underneath sounds as rapturous as these.Â The refrain of “feet been diggin’ out the miry clay” is a reference to

in which David tells us that the Lord elevates him from mortal chaos and places him on stable ground.

The other track by the Brewsteraires on this disc is the title cut; it’s worth getting this disc for these two songs alone.”

First of all, I want to know what a Brewsterary is: I keep thinking of some kind of secret society of beer makers or something of the like. Doesn’t quite fit with the gospel motif though. And yeah, this song is recorded off of vinyl so dusted I want to clean out my headphones after a listen. Solid material, especially the cross-gender harmonizing going on behind the lead.

The Sensational Nightingales: Guide My Mind
Available on The Lord Will Make a Way: Early Recordings 1947-1951

On the second day of Soul Hut, I gave Tofu my this of thee, Afrique’s cover of Bill Withers’ “Kissing My Love.” Tofu, in turn, hit us with the Sensational Nightingales and their “Guide My Mind,” of which John says:“A friend mondegreen-ed [interpreted] the chorus of this song (which actually reads “put your bit down into my mouth and bridle down my tongue”) as “put your FIST into my mouth”. In some way, that interpretation feels just as honest. I have a particular appreciation for good ol’ Spirituals that cry out to a god that takes no bullshit. Praying to a god to rein you in and set you on a right path is something different than bitching about not getting a Playstation for Christmas, y’know?

Of course, it doesn’t hurt that “Guide My Mind” is driven by the powerful and moving cries of the Nightingales demanding direction “RIGHT NOW LORD”. It is a prayer that sounds desperate, painful and elated all at once.

Meet the current lineup for the Sensational Nightingales.The Soul Sides .02:

What I like about this song is its great sense of rhythm and pacing. This is a very fast song, probably over 125 BPM and it just swings. I know John says it’s got some heavy content but honestly, I never even get around to listening to what the group’s preaching: I just get caught up in that quick-stepping it inspires. The elation I understand but I don’t hear the desperation or pain – just the power of testifying fast and furious.

By the way, just to give ample credit where ’tis due, Soul Sides often times finds images for long, lost artists by visiting the well-nigh impressive Soul Generation out of the UK. Kudos to Martin and his team of crack scholars of the soul science. Damn, that’s a lot of soul in that sentence. Dig it. Intro to the Soul Hut: While I was looking at the sites run by my fellow audiobloggers, it dawned on me that there was no reason why a bunch of us shouldn’t put our heads together and start collaborating. Thus was born Soul Sides + Tofu Hut = Soul Hut.

Just to give it up to TH – John’s audioblog was one of the first I came upon, alongside Fluxblog, and in no small way, helped spark the lightbulb above my head that said, “duh, dude, you’re a DJ and you already blog – start up your own!” John’s boundless energy with filling in the Tofu Hut with details-upon-details about the artists he highlights never fails to amaze. He also has a wider scope of musical interests than most other audioblogs I’ve seen but it never feels random or arbitrary.

This is the way this collab is going to work: I sent John five songs which he’ll post up on his site. He sent me five, the first of which appears here. We both gave each other comments on our selections and then were given the opportunity to add a riff of our own.

My theme for Tofu Hut was cover songs, the first of which being “C.C. Rider” done by Australia’s Southern Contemporary Rock Assembly. John sent me five gospel songs from years past – a genre that I’m pretty damn thin on. Here’s his comments on his first selection, by the Fairfield Four, is:This is, quite simply, among the most impressive expressions ofÂ emotion and art I’ve ever heard.

There’s a gradual but constant acceleration of tempo in the song; aÂ gentle evocation that the further we delve into faith, the moreÂ buoyant and unstoppable that holy joy becomes.

The sustained notes on this track are glorious; they dip and bob onÂ their ends like loops on a roller coaster. Every twist is a heartbeatÂ deeper into awe.

The P-Vine reissue import is NOT to be confused with the MUCH later release from Warner Bros. from the Fairfield featuring new material but listed under the same name. Nothing wrong with that album, but it ain’t quite at this vintage.

The vocal work on this is a kick in the gut – the way that each of the singers just holds onto their notes while the rest of the three harmonize behind it. I don’t listen to much gospel but I’ve never heard anything like it before. It’s incredibly powerful; like they’re using their very, very last breath to make it happen. Rumor has it that B.B. King used to listen to their music and based his own singing style off theirs.

“Don’t Let” was apparently one of the Nashville group’s “signature songs” for the Fairfield Four (easy to see why), who were big shots in the gospel scene in the 1940s. What’s amazing is that 35 years after disbanding, they got back together and started recording again – that’s a hell of a time out.