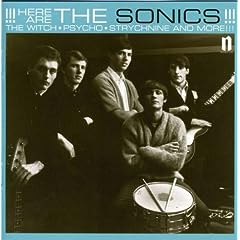 Cumbia, done in moog. Awesome idea, marvelously executed here by the outfit, appropriately named, Cumbias En Moog. I’m betting there’s a lot more of this out there, probably collecting dust somewhere between Colombia and Mexico City. Holler at me with that! This came out of a batch of cumbia 7″s I picked up the other month; money well-spent! Really solid stuff all around (the A-side of this 7″, for example, has a surprisingly good, bossa-flavored cumbia). I’ll share another one:

Killer intro; sounds like a marching band bass drum being pounded there, intercut with chattering percussion and then what sounds like an Indian flute creeps in (I’m assuming it’s some Peruvian woodwindaccording to commenter Alejandro, it’s a Colombian instrument called a “gaita”.). The whole package is an incredibly mesmerizing rhythm. Lyrically, I can only assume the song is a riff on Lucille Ball given that the vocalist (Beltran?) sings “Lucy! Luck!” Ricky Ricardo style.

The Sonics: Have Love Will Travel
From Here Are the Sonics (Etiquette, 1965)

One of my favorite songs to DJ with over the last year or so has been the Lefties Soul Connection’s cover of “Have Love Will Travel.” The song was originally recorded by Richard Berry in 1959 but like several of Berry’s influential compositions (“Louie Louie” being the most obvious), it would actually be later artists who’d record the more definitive version. In the case of “Have Love Will Travel,” the version the Lefties are riffing on isn’t Berry’s original but the 1965 cover by the garage rockers, The Sonics. With the fuzzed out guitar and screaming intro, their version rocks in a way that Berry’s never really did and it’s easy to see why it’s been such a compelling cover to cover since then. Check out Thee Headcoat(ees) cover for the femme makeover.

Droop Capone aka Dr. Oop is one of my favorite West Coast rappers from the indie hip-hop heyday; he had such a distinctive flow and a knack for choosing good beats to rhyme over. In 2010, he hasn’t slipped on that front, teaming with Japan’s Chikaramanga for this upcoming single on Tres Records. Call it nostalgist in me but I like any song that a shout out to the Good Life on the chorus. Cop this.

This is a classic of NOLA music though I didn’t get around to grabbing the OG 7″ until recently. If you want to understand the roots of funk polyrhythm, you’d do well to just pay attention to what’s going on this song in terms of what Smokey Johnson (second line ya’ll!) is doing with the drums and how it plays off against the rest of the layers of the song. Longhair’s piano work here is sparkling and I went with the lesser played Pt. 2 of the 7″ because I like it makes the Royal Dukes of Rhythm horn section more prominent plus you get actual vocals (from Earl King) instead of only whistling. (Home of the Groove has an excellent primer on this single). 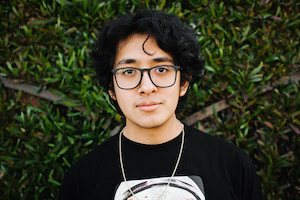