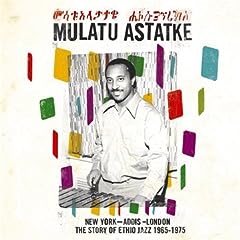 Once you hear Mulatu’s music, you don’t readily forget it. And while I don’t want to credit him with singlehandedly inventing Ethiojazz, he has been its main ambassador and along the way, become its most heralded apostle. Technically, most of the albums that introduced Mulatu to the rest of the world were “best ofs” – including the venerable Ethiopiques Vol. 4 and more recent Ethio Jazz Vol. 1 but this new anthology really captures a diversity in his sound in a way I hadn’t heard before. Mulatu’s incredible experiments ran the gamut of incorporating all kinds of funk and soul elements but blended with the unique “exotic” (notice the scare quotes) sound of Ethiopian music with its non-Western scales and you get to hear those different styles all circulating on here.

Some of this material I was familiar with but much of it I wasn’t and I was marveling at how incredibly diverse the styles represented are here – I was amazed at the Latin influenced tunes here, there’s some beautiful, straight ahead-style vibe-heavy jazz, and other times, some dark, slinky funky stuff. It’s impossible to just pick out a few sounds to “represent” it; it’s not divisible by anything less than its whole.

That said, I pulled out these two songs as a small taste of the contrast available on the whole disc. “Mulatu” is perhaps one of the most sparse, obviously funk-influenced tunes in his catalog – there’s so much…space…between the notes here, with the drone of the sax filling the air between. I love the minimalism here, how this song is built with all these slim but layered textures.

As for “I Frama Gami I Faram” – I always forget that Mulatu recorded several Afro-Latin albums but it’s another thing to really listen to how the Afro-Cuban styles of the Caribbean carries across the Atlantic and African continent. Except for the lyrics, if you had told me this was recorded in Havana, I would have easily believed that.

If you’re feeling all this, don’t forget the recent new album he put out with the Heliocentrics.