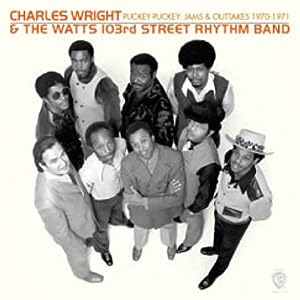 As with Haunted House, I’m making an excerpt of my liner notes for Puckey Puckey available to ya’ll but just keep in mind – this is barely a quarter of the total notes so please do pick up the CD (5000 copies only, then they’re permanently gone). I touch a little bit on what makes this compilation so interesting in that excerpt but here’s the basics:

The Watts Band recorded. A lot. A. Lot. Maybe it’s because they had Warner Bros. dollars behind them but Wright took the band into the studio often and had them jam for hours. As a result, the amount of unreleased music – much of its rehearsal jams and the like – is beyond expectation. We’re talking hours upon hours. Reissue producer Andy Zax went through and culled what he thought were the best parts.

Here’s two I pulled off this two-disc set:

Yeah folks – there’s an alternate version of “Express Yourself.” My face melted just a lil when I learned about that. If for no other reason, it’s worth copping the comp just for this. We’re not talking about, “alternate version with an extra horn.” We’re talking about basically a wholly different flavored recording. It’s the same song, sure, but it’s so much more laid-back and languid – you can feel the band just riding in that pocket on this one. Normally, I’d give you the whole song to enjoy but in this case, there’s enough to tease you.

“Jam #3” is an example of the long, flowing grooves that Wright would have the band work on in rehearsal. When I say long, I mean long – this total song is over 20 min (hence why I snipped it). On the one hand, you can hear all kinds of ideas being worked on here, really ambitious long-form ideas that the Watts Band wasn’t able to put out on record but you can see some connections between them, James Brown in the past, and looking forward to Clinton’s P-Funk experiments.

These long sessions were a point of considerable tension within the group, certainly not the only one, but it didn’t help matters and it was during this phase that the group was churning out some of their best work but also beginning to fall apart, especially as the group’s success grew. By ’72, with the departure of drummer James Gadson and most of the rhythm section, the Watts Band was no more.

Next in the Watts 103rd series: a monster overview of the recent Rhino UK series of Wright & Watts 103rd, Warner Bros. reissues.

And, oh yeah – there will be a giveaway at the end of all this and the mother-of-all giveaways it shall be!