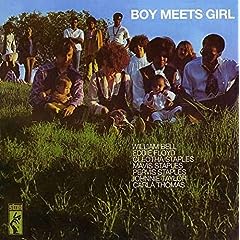 After my recent “Boys Meet Girls” post, I went out to check out the Boy Meets Girl album that “Strung Out” came from. I thought it was a compilation but if I’m not mistaken, it’s an album of all original songs, by over half a dozen Stax artists. Great concept…though the execution could have been better (there’s a lot on here that sounds like generic, late ’60s Stax and while “generic Stax” is not a bad thing per se, it doesn’t necessarily get your blood pressure up either).

I picked two of the strongest songs (excluding “Strung Out” which was the stand-out cut on here), including a cover of “Piece of My Heart” (naturally, a SS favorite) by Eddie Floyd and one of the lesser known Staples singers, Cleotha. I’m diggin’ it – I’d put it up there with Dusty Springfield’s versions of this classic. Also, Floyd and Mavis Staples also collabo on the ballad, “It’s Too Late,” a great example of Stax’s Southern soul sound.

THERE GOES YOUR SUMMER