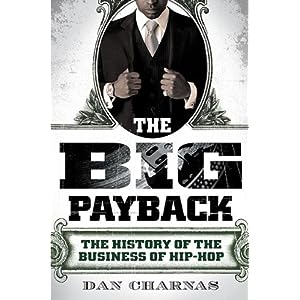 Just from word of mouth, I knew this book, at the very least, was going to be pretty good. Charnas has been making the book tour rounds, including a great interview on Fresh Air the other week and listening to him run down a few stories I knew about but didn’t have all the details for made me run out to a local bookstore and buy it. That’s right, I wasn’t even patient enough to order it online and save 33% (and I’m usually cheap!)

And so I started reading it last night and despite the fact that I’m fighting off the flu, I haven’t been able to put it down (and that’s saying a lot because I think I’m pulling a muscle from lugging it around).

Hands-down, one of the best books ever written about hip-hop. Absolutely up there with The Book of Rap Lists and Can’t Stop, Won’t Stop. For one, the level of reporting is staggering; Charnas is practically interviewing the assistants of assistants as a way to capture the full picture of subjects most of us are vaguely familiar with (for example, the story behind “Rapper’s Delight”) but never with this depth of detail. It’s also exceptionally well-written; the pacing is brisk despite the density of detail and there’s some key “big ideas” underscoring the book, especially around the role of hip-hop in reshaping American society for the last 30 years.

Right now, I’m reading about all the backstories behind how NYC’s rap radio shows came into being…about how Red Alert got his show on WRKS…but only after it passed through the hands of Jazzy Jay, Afrika Islam and Afrika Bambaataa. And only after the station manager, a professed rap hater was convinced to greenlight a hip-hop show after seeing people go nuts over Run DMC’s “It’s Like That.” Maybe this is just me but I love this kind of shit. And so will you. Promise.

Look – I don’t usually go out of my way to gush this much about something unless I really mean it and I don’t think I can properly conjure up enough superlatives to properly convey my enthusiasm. Let’s just say that if you think you’re a hip-hop fan, you need this book in your life. Absolutely essential.

Update: Total geekery but I got to the point where Charnas describes how “I Know You Got Soul” was this huge leap forward in production technique and how Hank Shocklee and Chuck D. each heard it the same day, but in different places, came together, heads all fucked up over it, and basically made “Rebel Without a Pause” in response. I LOVE THIS KIND OF STUFF.

Actually, if I had another idea for a hip-hop book, it’d be called When I First Heard… and it’d just be testimonials of rappers talking about being inspired by other people’s music. Don’t steal my idea!

OUT OF THE CLOSET

THE PEDDLERS SING “ON A CLEAR DAY”