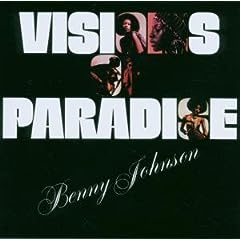 Apologies for the slow down, between end-of-the-semester grading and the fact that I’m packing up to move at month’s end, stuff is just a little busy right now. And heck, this post is about two years over due!

I first came upon the 7″ of Benny Johnson’s “Visions of Paradise” a few years back. I instantly was taken with that great horn intro on the song and when Johnson’s vocals come swooping in, he comes with this powerful, “clean” tone (reminds me a lot of Jerry Butler) that wasn’t like the lot of the more post-Otis soul singing I was used to. When I started digging deeper, I learned about the LP the song is named for. Like Matthew Africa, who just wrote about it the other month, I never quite understood why this LP sells for $100+ but lucked into a less expensive copy. Having sat with it, I can say that the LP is far from a one-tracker and while I’m still not sure what makes it as $ as it can be, it’s certainly worth having if you can get it on the cheap.

I don’t know a ton about Johnson – this is the only album I know him being connected to but looking over the credits, I realized partly why this album sounds as good as it does is thanks to Julius Brockington and his United Chair – the album’s main producer. Brockington’s an interesting guy; I’ve been up on his records for a minute (this 7″ being a favorite) and I’m sure there’s a longer post to be dedicated to him somewhere.

Back to Johnson though – I wanted to include “I Just Got To Know,” a deceptively simple mid-tempo cut that, to me at least, grew with each passing listen. Again, Johnson really sells me on his vocals here even though I’m not inclined to love his timbre but he knows how to work it well. For contrast, I also wanted to include one of the album’s slow jams (featuring some nicely used female back-up vocals) with “Give It Up.” Love the deep + sweet notes layered in here.