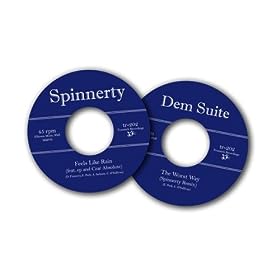 At some point last year, someone suggested to me: “check out this guy Spinnerty,” including a link to “Sweet Soul.” I instantly dug the vibe, it reminded me some of Adriana Evans’ songs from the early 1990s or a track that would have gotten some love at Nickies BBQ in the Haight. I should have already known this was out of the Bay but for whatever reason, I thought it was from Seattle. I also couldn’t quite figure out who Elliot Peck was but I’m assuming it’s the female singer on here…the fact that she’s name “Elliot” is both strange and cool.

It wasn’t until I was actually on Haight, at the Groove Merchant, listening to Spinnerty’s latest earlier 45, “Feels Like Rain” that I discovered: duh, Spinnerty, 1) isn’t a group. It’s a guy and 2) he’s currently living in the Bay (though he’s originally from the Midwest).

As much as I liked “Sweet Soul,” I really, really, really loved “Feels Like Rain.” I credit those sweeping vocals looped up in the background but this is so easy to throw onto single-song repeat and just keep playing it over and over. Peck is back, this time credited as “EP” and joining her is rapper Czar Absolute who drops two small verses. The song works better with vocals but there’s nothing wrong with flip the instrumental on as a lovely bit of background.

Update: I got a nice email from Dan “Spinnerty” Finnerty who corrected my timeline: “Feels Like Rain” actually came out before “Sweet Soul.” He also filled in some backstory:

“The sample for “Feels Like Rain” I actually found at Rooky’s [another record store in the Lower Haight]. It’s a funny record because you can hear one of the guys coughing halfway through and some other foibles like that. I was over at Elliott’s house doing some recording of another emcee for a different track and was playing some beats and heard Elliott humming along in the other room a la the oooooo’ing that made the final version. DING. Lightbulb went off.”