Especially since I find all the Clipse haters to be high comedy (see the comments in the previous post for examples of what I mean), it seemed tremendously apropos that I should get sent a remix of their “Mr. Me Too” that combines the best (or worst, depending on your perspective) of both worlds: a little soulfulness + a little crackfulness. The result = a blend of the Clipse over Lee Fields’ “Honey Dove.” Thanks to Z.A.K. for the remix.

You can hate it now. Proceed.

By the way, what I find particularly funny about the people sniping at the Clipse CD is that, inevitably, one piece of “evidence” offered up for its weakness is the fact that bloggers like it. This makes a remarkable set of assumptions about who bloggers are…which I think it’s pretty f***ing funny since, not to long ago, bloggers were basically making similar remarks about “writers” (i.e. dudes in print journalism), as if anything writers liked was suspect. Yet now, bloggers are the new (well, not so new) standard for poor (or at least, overhyped) taste, to such an extent that commentors (who basically are bloggers in small scale form. Think about that) will seemingly go out of their way to scrutinize something that too many of the wrong people seem to like.

C’mon people…who the f— cares what bloggers (or anyone) has to say about it? Anytime you have to open up a post by saying, “I’m not buying into the hype” (or some variation on that), you’re, in essence, jumping on a different bandwagon but it’s still petty groupthink. Hating the Clipse is the new loving the Clipse.

And note: I don’t care if you like the group or not. There are many valid reasons to dislike the Clipse. Other people liking them is not one of those reasons however.

By the way, I found the following on a message board and it’s probably one of the most impressive pieces of music criticism I’ve seen yet on the Clipse (or any rap album) this year. On a message board. The game done changed.

“I picked this up yesterday (full price, suckers—s’nothin’), and I think dudes trying to graft onto this record some overarching concept or some moral underpinning are reaching. I can appreciate the impulse, because for many reasons (reasons, it should be noted, that are being missed by many of the over-literal smart-dumb vivisectors around here who have mistaken all the hubbub for something having to do with originality or message or subject-verb agreement or some similarly irrelevant shit) this record doesn’t feel like just another record, but, I mean, come on now: When every expression of paranoia or regret is a single pea under mattress after mattress of coke, money, lifestyle, and coke-money lifestyle, reading it as a moral tale takes an unseemly amount of princeliness.

I think this insistence on the album’s progress or movement (from victim to victimizer, from underdog to top dog, from braggadocio to remorse, etc.) rings false because part of what’s really hitting me is the brilliant static quality of this record. Nothing on here goes anywhere. Every single song on this thing traces a very small circle–sell crack, get money, spend money, feel vague regret, but then get back to business–but traces it repeatedly, deeper every time, and with perfect focus. And it’s this repetition, this relentlessness, this inescapable acting-out of the same sequence and following the same circuit track after track after track that gives the whole thing its hypnotic gravity.

It makes no sense at all to hold up individual lyrics and say, “See, these guys are smart because they know that the crack game is destructive, they know that wealth has made them paranoid and incapable of love, and I know that they know because they say it once in this one song and again in this other and….” Please miss me with that shit. Whatever this record accomplishes, it does so not by talking about it, but by feeling like it. Just like Velvet Underground’s “Heroin” succeeds not because it says “Man, heroin sure is fucked” but because it feels magnetic and horrifying, or just like There’s A Riot Goin’ On succeeds not because it says “Fuck you, hippies—shit is real” but because it feels dystopian and personal and cauterized and utterly non-communal.

Hell Hath No Fury succeeds not by pointing out the traps of the crack game, but by feeling, on every conceivable level, trapped. Everything that happens in these songs feels like it’s already happened–no real history, no important future, just…done. Time is flat. Everything just is. For all the references to jets and Europe and globe-trotting hither and yon, I hear no exterior at all in this record—it’s all driver’s seats and cockpits and showrooms and hotel rooms and front rooms and VIP rooms and rooms with walls that seem to be closing in because they are. It’s the airtight coffin that won’t let the body decompose, yunno? You won’t get that listening to one cut or quoting one verse; it’s all in the accumulation. They keep piling on detail after detail because, after all, what else can they do? Shit just keeps coming, but their circle isn’t getting any bigger.

And the music knows this, too. All the beats are big, but not one of them sounds open to me. Just like the lyrics, they all sound both inescapable and incapable of escaping themselves, just evil and broke-dick, grindstone after grindstone. No whole drums anywhere—those that are shiny are broken (the clipped cymbal fills in “Dirty Money”), and those that are healthy are obscured (the massive rolls buried alive under “Hello New World”). There’s all these bits of hand percussion beating cloven hooves under everything, and from the wheezing squeezebox in “Mama I’m So Sorry” to the muzzy keyboard nag in “Dirty Money” to the unintelligible spoken-word particulate that clogs some distant filter in the deep background of “Trill,” the whole thing just sounds enormous and syphilitic. As a setting for the above, it couldn’t be more perfect. I don’t expect to hear a record this good for quite a while.”

BRIGHTEN UP YOUR FRIDAY 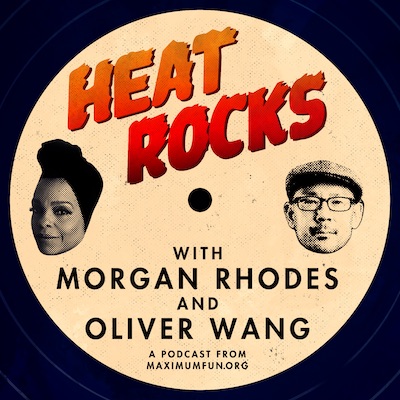