The Devics: Distant Radio
From Push the Heart (Filter, 2006)

I was recently in Los Angeles while Sharon was attending the Radical Craft Conference in Pasadena. Tasked with occupying Ella for the day, one of my techniques in making sure she was getting her naps in was hitting the road and just driving. Anywhere. Randomly. Which, in L.A. is a rather easy thing to do.

I have a love/love relationship with driving in Los Angeles. Yeah, there’s gridlock. There’s atrocious air pollution. There’s the materialism of equating what you drive with who you are (for the record, I was rolling in a rented Kia mini-van so flossin’ I was not). But I grew up in L.A., I learned to drive there, and the radio became part of my life in a completely different way as it turned into a constant companion on the road.

This is hardly a new observation but music simply sounds different – mostly better – in the car. Part of it is the acoustics of the space but all fidelity aside (my first car had a crappy, single speaker stereo with no cassette deck even) the moods invoked by music forms a synergy with the rhythm of driving (except in cases of said gridlock). Everything feels more expansive, more atmospheric (just to abuse that oft-used musical cliche), more perfect in the way we want music to be.

So anyways, I’m winding my way through streets I’ve never been before, somewhere between South Pasadena and downtown L.A., and I’m tuned into KCRW’s Saturday “The A Track” show and these two songs come on, back-to-back and I’m totally mesmerized. Surprising as it may sound, I actually like stuff that’s not soul/funk/Latin/hip-hop and for some reason, I’ve always had a special place for female, moody singer/songwriter types. I think this is because an ex got me into Sarah McLaughlin and then I discovered Aimee Mann on my own and since then, I’m just a sucker for this kind of sound. I’m not making apologies or excuses here: I don’t care if other people think it’s pretentious indie folk dribble (as one friend said, upon hearing the Devics’ song, “that’s so Lilith Fair.”), I really do like this stuff. In moderation. (I feel the same way about, you know, Young Jeezy).

Of the two, the Devics was more enticing that afternoon – it’s those damn guitars and the vocals offer a melancholy yet expansive feel that seems well suited to a long drive to nowhere. By the way, you don’t hear it on this song, but elsewhere on the album, the Devics make good use of accordion. You don’t hear that everyday. Outside of polka. (Check “A Secret Message To You” especially).

I think Feist has a superior vocalist – I like the edge of her voice and her nuances in singing. Musically, it’s a big quiet stormy but again, on a nice Saturday afternoon, it seemed to hit the right groove. Also, Let It Die is more ambitious than Push the Heart but honestly, I doubt either CD is going into my constant rotation despite my soft spot for the two songs in question. 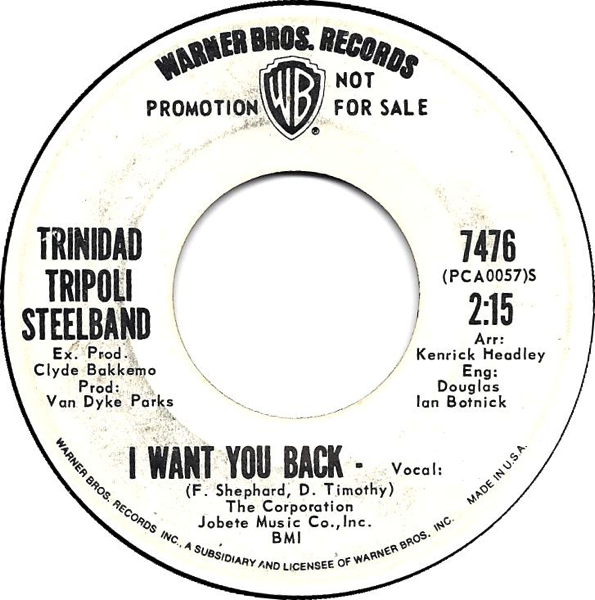 TRINIDAD TRIPOLI STEELBAND: I WANT YOU BACK (1971)

THAT’S HOW THEY ROLL, TROOP