(Ed.: This is the third in a three part series by Charles Hughes on the legacy of Muscle Shoals in soul music. –O.W.)

Both Eddie Hinton and Arthur Alexander were great songwriters, crafting of soul songs that cut as deeply as those of any of their contemporaries. But I didn’t put them here simply for that, although both cuts are self-penned.

Eddie Hinton was also a great guitar player, playing on sessions from the Staple Singers (it’s Hinton, not Pops Staples, playing the guitar solo on “I’ll Take You There,” despite Mavis’ cries of “Daddy”) to Aretha Franklin. But that’s not why he’s here either. No, I chose these two songs by these two artists to end these entries on Muscle Shoals because of the fact that both Arthur Alexander and Eddie Hinton were great singers, but not as we would perhaps expect.

Arthur Alexander, a tall and graceful black man who worked as a bellhop before his recording fame and drove a bus after the glory faded, loved country music, and the twangy singing of George Jones, Hank Williams and others. (Alexander was anything but alone in this, as nearly every Southern soul singer expressed their appreciation for country music.) His vocal performances are gentle evocations of country emotionalism that have ostensibly little to do with the preaching, pleading or shouting styles normally associated with soul music.

Eddie Hinton, on the other hand, was another Alabama white boy with a fierce love for black music. Hinton, whose best recordings (including “Hard Luck Guy”) were only issued after his death, adored Otis Redding, and applied Redding’s intense vocal style to his own, creating music that was no less “soul deep” than any of his African-American counterparts. The white boy singing Otis Redding, like the black man doing George Jones, speaks to the deep interracial paradoxes of Southern soul music, specifically in Muscle Shoals, Alabama. Both Hinton and Alexander have stories that end tragically, as both men suffered a lot and died before their time. But neither man’s music disappeared when they did. In fact, at least for me, this music defines something very important about the way we think about race, culture and American history. There’s a whole lot more I could say, but Alexander and Hinton – like all this week’s artists – can say it better than I ever could. 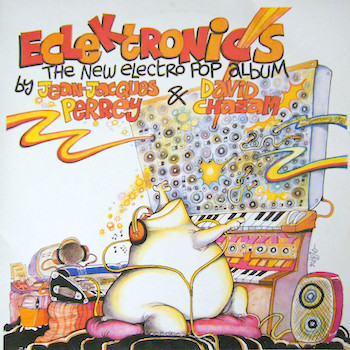 JEAN-JACQUES PERREY AND DAVID CHAZAM: ECLECTIC TO THE END

DUST AND GROOVES BOOK OUT NEXT WEEK