Since it’s been a while, I decided to step up and drop some album flavor. I wrote up a much longer review of this bootleg on my main blog, complete with sound clips but the short story is this: this was the Aftermath album that was supposed to have come out in 1998 but for whatever reasons, Dre deaded it and there went King T’s career with it. The crazy thing is: this LP is REALLY fucking good. I mean, even at six years old, the production still sounds solid and King T is in fine form. He’s really one of the best MCs to ever come out of LA – smooth and cool like a real OG should be – and he’s just killing shit on here. Makes me wonder what that deaded Last Emperor album on Aftermath sounded like too. What was Dre thinking?

Folks seem to be mixed on this but I’m 100% positive that this is such a great mix-CD. I’m writing it up for the Bay Guardian but the gist of what I said is that 1) it’s incredibly well produced and not some hatchet, fly by night job, 2) the creativity that went into figuring out how to flip the Fab 4 to fit Jigga is commendable and 3) it just plain SOUNDS GREAT. Pure matter of opinion of course, but this mix-CD actually made me appreciate both “the Black Album” and “The White Album” (see below) better and that’s a powerful effect for any mix-CD to engender.

3) The Beatles: The White Album

Ok, I feel a little foolish in posting this because, hey, it’s the fucking Beatles but I had NEVER listened to this album before and I have Danger Mouse to thank for creating an incentive to finally peep it. I grew up listening to the Beatles, but it was always anthologies, never complete albums and I could kick myself in the ass for having slept so long. There are just so many great songs on here: “Dear Prudence,” “Martha My Dear,” “Blackbird,” “I Will,” “Julia,” “Sexy Sadie,” “Helter Skelter”, “Long Long Long,” “Cry Baby Cry” – ya’ll know the deal. A lot of folks hate on the Beatles b/c they think they’re overrated but shit, sometimes, you just need to bow down and recognize talent, yaoming?

First of all, this cover is genius – it’s on some Fatlip tip. Kanye isn’t the Answer with a capital “A” but dude makes some great songs (“Jesus Walks,” “All Falls Down,” “Two Words,” etc.) and does so with both introspection and a sense of humor. You don’t have to feel like you’re hopping on a bandwagon just to throw homie some love with coming with a solid debut. Don’t be all insecurrrr – feel him.

5) Michael Jackson: Got To Be There

Ah, remember the gold old days before Michael Jackson became Wacko Jacko, one of the biggest freaks in pop culture and potential child molester? Remember when he was, you know, a great soul artist? This isn’t even necessarily his best solo LP but I just dig how dude is chilling on the front in his big cap and cord jacket like, “hey, I’m the shit, I know it, but I don’t need to floss. Just feel me.” Plus he’s singing “Ain’t No Sunshine” – that gets automatic props but then he smacks you with “I Wanna Be Where You Are,” which makes you think that maybe the days of polyester and visible chest hair weren’t so bad after all. I guess this isn’t that surprising but I wasn’t expecting that he’d have different arrangers on each song, splitting duties b/t James Carmichael, Gene Page, “The Corporation” and Dave Blumberg, who only drops one song (the title) but does a great job with this light and pretty soul ballad. And flip the B-side and you get a sorta funky rip on “Rockin’ Robin” – cheesy but not wack. As for “Maria”…whoo…Mikey be killing it. Seriously. Damn, what happened to him? 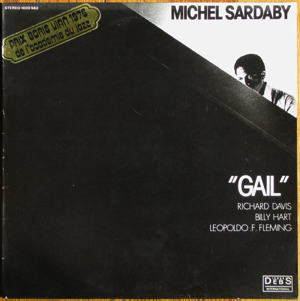 GET READY, WE’RE ON OUR WAY