If ya’ll haven’t reached Mayer fatigue yet, here’s my review of his new album for
NPR. Why Can’t Detroit Cash In On Its Music Scene? : NPR Music

My NPR.com song list tracing the Charmels’ “As Long As I’ve Got You” through 40 years of music and then some just ran. It includes one song off the El Michel’s Affair’s new Enter the 37th Chamber album. Check it out: ‘C.R.E.A.M.’: The Story Of A Sample : NPR Music

This might be of interest to folks: I recently interviewed Jeff “Chairman” Mao of ego trip fame on the eve of the new Miss Rap Supreme show on VH1 (just two weeks in and already with more beef than a Costco butchery).

Surprisingly, despite his high profile as a journalist/writer and DJ/collector, I found relatively few other interviews out there on the interweb and so my conversation with Jeff covered a broad range of topics in terms of his own personal history as well as professional insights on everything from hip-hop to music criticism to what makes compelling reality television. It’s a long interview but I think it makes for a good read (biased as I am).

If you’re ever in New York, be sure to roll through APT on Saturday night to see Mao and his friends spin.

As a Soul Sides bonus, here’s one of the songs that Mao mentions in the interview, “Tribute to Obabi” from the Last Poets…a tune he heard being spun at the Soul Kitchen party in NY back in the 1990s that made him realize that people will actually dance to music like this.

The Last Poets: Tribute to Obabi
From Chastisment (Douglas, 1972) I came upon this magazine today: a 1976 issue of Hep, an African American tabloid from the 1970s, published out of Ft. Worth, TX. This particular issue, apart from noting that “Blacks Are More Psychic Than White” and that alarming, banner story about a wild boy raised by monkeys, also had a cover story about Betty Davis, plus stories on Donna Summer’s “new” single (“Love To Love You Baby”) and Miami’s Little Beaver. I scanned in the relevant pages to share with you all (wig ads not included).

Bonus: More scans. These include a feature on the death of original Supremes member Florence Ballard, a random assortment of advertising and yes, wig ads by popular request, PLUS a racial explanation of psychic powers.

I have my first piece for The Nation available on newsstands now: “Boogaloo Nights,” looking at – you guessed it – Latin boogaloo in all its splendor. This essay serves as a primer on not just boogaloo’s history but its import in understanding the intertwined complexity of American cultural exchange.

A few “additions” – mostly things that were cut from the article for space. First of all, I tried, in the original drafts of the piece, to acknowledge the immense contribution to the public knowledge about boogaloo thanks to Juan Flores and the late Max Salazar. Much of my historical retelling of boogaloo depended on their research and I didn’t realize the final copy had excised my attempt to credit them as such.

Second, the article tends to focus on Fania as a “bad guy” figure in the death of boogaloo and that’s probably largely earned but what’s missing is how ironic it is that Fania (or really, Emusica) is taking such a leading role in reviving the genre. I think that’s a fascinating story in and of itself but I wasn’t able to get that deep into it here. Moreover, I also want to note that Fania is far, far, far from the only label in town in regards to the boogaloo. It was arguably the biggest player but one of many.

Fourth, and this actually very important and something raised by someone in the comments: the piece is based around the idea of boogaloo being a cross-cultural bridge, between Latin America and African America but I couch it, at times, in the language of “Brown and Black” and I realize this is a faulty shorthand. After all, the notion of race within Latino communities is much more complex than a label like “Brown.” The primary personnel behind the boogaloo revolution – Puerto Ricans – can be Black, Brown or White if we’re talking about skin tone and so it’s not that useful to deploy “Brown” as a catch-all category.

I also wrote a sidebar on five boogaloo compilations worth picking up for the neophyte.

Fear not, much more on boogaloo to come. I’ve been asked – and gratefully accepted – the opportunity to write liner notes for an upcoming anthology of Joe Bataan’s Fania output that will be coming out around April. 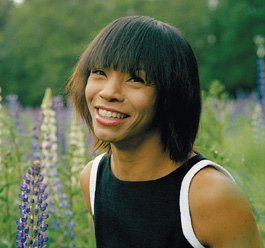 Sometimes, you get to write about something you actually, deeply have affection for. Say…such as reviewing the Nicole Willis/Soul Investigators’ album for NPR. Those are the times I love my job.

Also, this is a few weeks after the fact, but my friend Hua wrote a phenomenal essay on the melancholy beauty that is LCD Soundsystem’s “All My Friends.” If you haven’t heard the song yet – peep.

The new issue of Stop Smiling is dedicated to all things Southern, including a massive section on the history of Stax Records (proper!) Also included is an interview with Sharon Jones by yours truly where she speaks on James Brown, wedding bands, and oh yes, Amy Winehouse.

If you have a hard time finding this on your newsstand, order from them directly.

Forget to mention these earlier:

I wrote about the Mighty Voices track here I believe but I never did write-up Sisters Love for Soul Sides. Definitely a track worth checking out if you never have before.