It took a long, long, long time, but I finally got around to copping Melvin Bliss’ breakbeat classic, “Synthetic Substitution.” In a sense, it’s a song I’ve heard many times, at least the first bar, given how popular a drum break it’s been. But it’s been a long time since I actually listened to the song itself and when it arrived in the mail, I threw it on and just let it ride and was reminded of this:

It is one of the more eclectic of the classic breakbeat songs I can think of. James Brown songs – “Funky Drummer” – are awesome but they’re straight ahead funk tunes. They “make sense” the same way Skull Snaps’ “It’s a New Day” or the Honeydrippers’ “Impeach the President” make sense; they’re great tunes but nothing about them necessarily throw you.

“Synthetic Substitution” totally throws me. Just listen to how it unfolds: that signature breakbeat gives way to the darkness of the keys, then an unexpected vocal drop-in which is so solemn in tone. Listen to the lyrics – it’s some heady stuff. But then the song swings in feel midway through (I want to say it goes from minor to major but I may be wrong) only to give back ground to the song’s inherent somberness. This song may be many things but simple or straight forward it is not.

Earlier in the year, the Ultimate Beats and Breaks (band?) released an instrumental cover of the song that’s been getting some good responses. I think it’s pretty solid but to me, the song isn’t the same sans lyrics. I’ll let you decide.

Elias Rahbani: Dance of Maria
From Mosaic of the Orient (EMI Lebanon, 1972)

Some really far-flung, disparate regions have seen the rare groove reissue treatment in recent years. Scandinavia, the former Eastern Bloc, North Africa, the Far East, South America: they all seemed to have their pioneering clusters of mad musical geniuses and jazz iconoclasts in the ‘60s and ‘70s, and it’s been fabulous to have their respective musical riches brought again to the surface like so many Concepción ducats. Soul Sides readers might remember O-Dub’s September 2006 feature on the Turkish dancer Ozel Turkbas, and Turkey, too, has seen some attention recently (see the insane, insane Mustafa Ozkent and Selda reissues on Finders Keepers, for example). Which finally brings us around to nearby Lebanon and this loopy bit of Levant pop.

In 1972 you’d still come across references to Beirut as “The Paris of the Middle East“ in current issues of National Geographic; the city was, after all, the region’s nerve center of television, cinema, and radio. And Lebanese pop wunderkind Elias Rahbani was squarely in the middle of it all. His “Song of Maria” works precisely because of its cosmopolitan soul: it’s Eastern melody with Western circuitry, experimentalism with a sense of pop humor, and it’s crammed with flowing Farfisa organ lines, electric bass, keyboards that aren’t mizmars but sound exactly like them, bouzoukis, guitars, and even a few choice moments for you breakbeat aficionados. But, then again, this was 1972, a ravaging decade and a half of civil war was still a few years away, and, as far as Rahbani was concerned, there was room for all of it inside the pleasure dome.

The Lebanese Civil War sent the city’s artistic, intellectual, and musical life fleeing in droves to cities like Cairo and Paris. As of at least 2005, however, Elias Rahbani was still residing in Lebanon; with a prodigious career as a pianist, lyricist, producer, arranger, and pop and classical composer, Rahbani now does what any aging Lebanese hipster would do – he hosts SuperStar (سوبر ستار), the Arabic version of American Idol. It’s a show that, personally, I’d give my eye teeth to see. We wish him the best of luck.

Manny Corchado: Pow Wow + Up and Down
From Aprovecha El Tiempo (Swing While You Can) (Decca, 1967).

Barely had early boogaloos like Joe Cuba’s “Bang Bang,” Pete Rodriguez’s “I Like It Like That,” and Ray Barretto’s “El Watusi” become bona fide commercial hits than young Latino combos were coalescing to perform it, savvy older bandleaders were adding it their repertoire, and homegrown New York City record labels were there to package, promote, and, naturally, sell it. This is part of what’s exciting about the boogaloo: for a few years in the ‘60s, there was this great rush to capitalize upon its ephemeral success, and forty years later it makes for a lot of hip, fascinating music. It’s also what’s vaguely disappointing about the boogaloo. After hearing what sounds like your thirty fourth derivation of “Watermelon Man” for the day, you’ll start looking around, exhausted – wondering if maybe there isn’t something a bit formulaic about it all.

Then – heralded as though with a chorus of miniskirt-ed angels – you’ll catch something like 1967’s “Pow Wow.” From its long, soul clapping introduction, “Pow Wow” sails forth in a brilliant burst of percussion, piano, horns, and pure Nuyorican dance floor bravura potent enough – unlike possibly any other boogaloo – to transcend its embarrassing Tonto wampum and “pipa de la paz” chatter.

Sometimes I’ll hear that note perfect nugget of 1970s harmony soul – or, say, some blissed out ’68 pop production – and I’ll scratch my head, amazed that, in its time, the release in question went absolutely nowhere commercially. Not so with Corchado’s “Pow Wow.” It’s obvious why it wasn’t a hit: it’s just too heavy, too booming, too wild. Too everything. Which, of course, is why we love it today.

Loyal Soul Sides readers may already know “Pow Wow” from its recent reissue as part of the fabulous Jazzman 45 series. Less familiar, possibly, is Corchado’s “Up and Down,” a storming jazz mambo with a bottomless bassline, which, even more than “Pow Wow,” showcases the heart stopping power of a full Latin orquesta.

Corchado’s name turns up occasionally in the context of the ‘60s NYC Latin scene (primarily as timbalero for the same Joe Quijano ensemble that recorded an early version of “Up and Down”), though Aprovecha El Tiempo – a sublime mix of mambo, boogaloo, bolero, and Latin jazz – was, alas, his only album as a band leader. This album was part of Decca’s brief lived and forward thinking Latin series, which also included slick releases by Chano Martinez, Joe Panama, Johnny Zamot, and Ozzie Torrens. 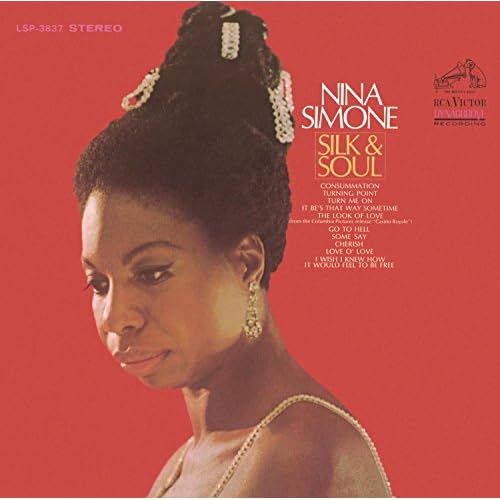 You could run through the superlatives all day and you still wouldn’t begin to capture the thrilling complexity of Nina Simone. One thing can be said categorically, however: Nina Simone was one of those rare talents who chose eclecticism over any single easy genre – possibly the most difficult path for an artist – and, moreover, it was a choice that she triumphed with, both commercially and artistically.

Such eclecticism depends on the right palette of material, of course. It also depends on a wide open emotional versatility. And, yes, Simone had that, too – whole warehouses full of it. She could croon an English folk ballad with tortured vulnerability, slap some joy back into even the moldiest jazz lyrics, or – in the case of “It Be’s That Way Sometimes” – extract those choice bitter notes and polish them until they shined like metal. Written by her brother Sam Waymon, Simone seems to especially relish the ironic spirit of this composition; hard drums breaking like waves beneath her, she tears into the material with a ferocity that could’ve bent steel. She is practically screaming “IT BE’S THAT SOMETIMES” by the end of the song. Powerful stuff.

“It Be’s That Way Sometimes” was the highlight of 1967’s Silk & Soul, one of Simone’s earliest albums for the RCA record label.

(Ed. note: I’ve invited Daniel Shiman of Office Naps to become a guest contributor to Soul Sides. Hopefully, time allowed, we’ll be seeing something from him every couple of weeks. Here’s his inaugural post. –O.W.)

The soundtrack music of India’s Bollywood cinema has only recently started to garner much attention in the West. If you’ve heard it, though, it’s likely that you’ve also heard the playback singer Asha Bhosle; hers is the spellbinding wail heard in literally thousands of Indian movies. “Dum Maro Dum” first appeared in 1970’s Hare Rama Hare Krishna , a Dev Anand production featuring Zeenat Aman as the Westernized hippie girl, and a movie whose subject matter must have afforded R.D. Burman, one of Bollywood’s more experimental composers, a refreshing amount of latitude. Constrained only by the clichés of Western hippie culture that he could dream up, Burman makes the most of his charge with “Dum Maro Dum” (which apparently translates as “Take Another Toke”). It’s a montage of creaking synthesizers, psychedelic guitars, and, of course, vocals nailed by Asha Bhosle in an ear-piercing exposition of sound.
–Daniel Shiman