One of the upsides to the Rap Purge – abetted by some timely listings – is that I’ve been knocking down some long-time white whale records. If you recall from our previous convo around this, a White Whaleâ„¢ is a record that has tormented you with its elusiveness.

It’s not enough for a record to merely be high on your want list. A record can only cross into White Whale-ness once it’s eluded you enough times to make you want to curse the day you learned about it (but you can’t let it go). Case in point:

This is a good, solid cover of a J.R. Bailey original. I first heard it on Chairman Mao’s Run For Cover mix (2005) and I liked it enough to start looking for a copy. It’s not a common 7″ but not crazy obscure either, usually sells in the 40+ range. However, I decided “I want to get this for cheaper,” not an unreasonable desire/expectation but that decision proved to launch the 7″ onto the road to White Whale-dom.

In late 2008, I scored a NM copy at my threshold – a real bargain I thought. The problem was that the seller put the 7″ into an envelope and…that’s it. No padding. Predictably, the single arrived completely cracked in two.

The next copy didn’t cross my radar for another year and a half, this time, a VG+ copy for $11. Bargain, right? Sure, except the 7″ arrived and it was clearly overgraded; the thing was so scratched up, it was barely playable. At this point, “After Hours” had officially entered White Whale-dom, with a vengeance.

I’d like to say the third time was the charm but I confess – I just finally gave up after waiting another year to see a good quality copy come up and this time, I just gave up and threw down $36 on it. White Whale defeated but not the way I wanted. Still happy to have the single though.

Then there’s this White Whale:

This one is a Soul Sides classic, dating back to 2008 when I first heard it. Easily one of the best 2-minute songs I know but so does everyone else. It regularly sells for $300+ and that’s the main reason it entered White Whale territory; I just didn’t want to go that heavy on it (even though I felt like it richly deserved it) but thanks to Rap Purge proceeds, I decided to go for it and was pleasantly surprised to score a clean, VG++ copy for $220. (As Matthew Africa pointed out to me though, that’s still a lot for a styrene record that I’ll probably just file in favor of the 2003 reissue. C’est la vie).

The last record in this trio can’t really be given full White Whale status. More like Lil Beluga or something, since 1) I’ve only been seeking it for about a year, 2) it’s uncommon but hardly unobtainable (about a copy a month pops up), 3) I copped the second issue rather than a first issue on Soulin’. Status-regardless though? One of the best New Orleans’s funk singles I know – killer, killer rhythm and the way they bring in the tambourine after two bars is wicked. While the Bobby Reed is two minutes of heaven that really doesn’t need to be any longer than it is, I do kind of wish “Funky Soul” was about a minute longer – maybe with a sicker bridge or something – but I’m not really complaining. 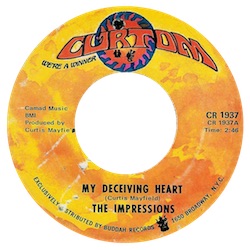 A RETURN TO SOUL SIDES / SLICED