In 2006, I moved from San Francisco to Los Angeles and at the time, the spot my wife and I moved into didn’t have enough space for me to unbox my rap records so I just left them in the garage and ever since then, that’s where they’ve stayed: completely boxed.

In moving to the new spot, I have enough shelving to absorb much of the rap collection but not everything. More to the point though, the fact that 90% of my hip-hop collection could stay boxed for four years meant that I clearly wasn’t really making use of them at all and that was a big neon sign that screamed “time to purge.” It’s a daunting task though – I have somewhere around 50-60 boxes of records that need to be gone through which is it’s own headache.

I finally started today. I went through about 6-7 boxes of stuff, including “Aboriginals” through “Biz Markie,” stopping along the way to keep more of my Aceyalone records than i might have predicted while gutting a lot of my Beatnuts records, much to my surprise. Anticon titles = out. Big Daddy Kane records = in. And so forth.

The upside to all this (and believe me, this is the thinnest of silver linings) has been rediscovering a few odd ball records that I figured I’d share just to salvage something useful out of all this.

All said, Romeo Black isn’t exactly killing it on the rhymes and the song goes on at least 1-2 minutes more than it should. But what caught my ear was that producers, The Hollywood Impact, flipped the Average White Band’s “Reach Out” in a way that’s very similar to what Sir Jinx did for Ice Cube’s “Steady Mobbin” only Romeo Black had the beat a year before Cube did (of course, Jinx also did it better).

Interestingly, Kwame flipped Stevie Wonder’s “Hey Love” a year before De La did it and both their songs use conversations within them though De La’s was funnier and less corny. (Speaking of which, if you want to understand why Biggie deaded Kwame’s career over the polka dots, this LP cover says it all).

Supposedly the first rap group of San Bernadino (Inland Empire, represent), dropping verses about NBA stars over “Cutie Pie.” As gimmicky as gimmick songs can get but I’m kind of forgiving given the era and the place. Besides, it’s still probably better than listening to actual NBA stars rap.

The purge will be going on for months so we’ll see what other goodies I can bring you from it.
(Also, if anyone is in the market for a few thousand rap records, uh, hit me up?) 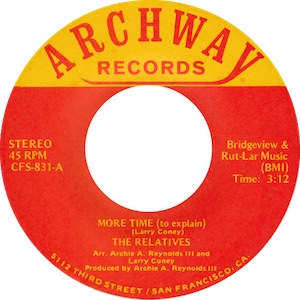 7 DAYS OF SOUL: THE RELATIVES

FRANKIE AND THE SPINDLES: 10 COUNT