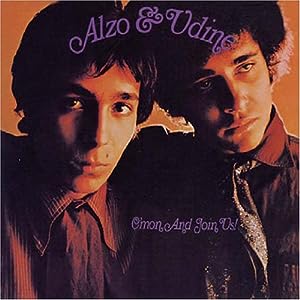 Alzo & Udine were Alzo Fronte and Uddi “Udine” Alinoor, one of those “only in New York” combos of singer/songwriters who only released this one album together in the late ’60s. I’m not even certain where I first heard this LP (probably at the Groove Merchant), but it’s been one of the sleeper albums that I’ll forget about and then rediscover how awesome it is. It’s hard to classify this LP; if I mashed up all the various descriptions of it, it’d be something like “Latin soul hippy folk pop” though I find the Latin elements more subtle compared to the folksy pop touches, especially on the vocals. Basically, this is happy music; it sounds happy and should make you feel happy.

I actually flipped the order here – “C’mon and Join Us” is the LP’s last song while “Something Going” is the first, but I liked how Alzo and Udine took time to introduce themselves before the beginning of the title track. The two songs are really indicative of the overall sound of the album: super-catchy rhythms with almost a flamenco sabor (at least to my ears), that shiny pop feel I just mentioned, and most of all, these killer vocal arrangements that find both singers stretching out their falsetto. Especially on the title track, there’s considerable thought put into how the song unfolds and switches up along the way. My favorite part starts around the one minute mark and builds towards the chorus, as charming a hook as I can imagine. Everybody feel it? Yup, I do!

Likewise, “Something Going” starts one way but then shifts into another and really, almost all the songs on the album follow similar paths. This is a remarkably consistent album in terms of the style of the songs and given that I love that style, I’m good with it picking a lane and then driving the hell out of it.

2 thoughts on “ALZO AND UDINE: THEY GOT SOMETHING GOING”