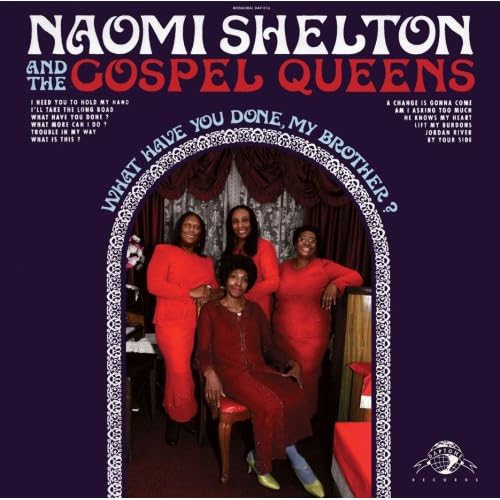 Daptone’s latest release by Naomi Shelton and the Gospel Queens, out Tuesday, May 26, is a little bit Sam Cooke, a lot ’60s soul, and all in servitude to the Lord. â€œWhat Have You Done, My Brotherâ€ is such a fine record. Lyrically, it’s all gospel but numerous tracks sound straight out of the ’60s soul bin. While that may sound foolish knowing it’s a Daptone record, credit Cliff Driver and the various Dap-Kings members that play on this record for really giving it a nice soundbed. Also, credit the Gospel Queens – Edna Johnson, Bobbie Jean Gant, and Cynthia Langston – as they really enliven the call-and-response with Shelton.

Driver, the musical director of the group, is a pianist who has backed numerous soul legends such as the R and B of R&B… Ruth Brown, Solomon Burke, and even had a stint in Latin music working with the Johnny Ortega Band. If you recognize the lead vocalist, it’s because she appeared on the Desco 45 â€œ41st St. Breakdownâ€ by Naomi Davis and the Knights of Forty First Street and on The Sugarman Three’s â€œPromised Land.â€

The album was culled mainly from sessions in the summer of 2007 with some even predating that. The title track is the most secular of the material and has a distinct Daptone sound, which may be the reason why it was chosen as the lead single. Elsewhere â€œI’ll Take The Long Roadâ€ and â€œI Need You To Hold My Handâ€ really dig deep into the gospel roots and are the two showcases on the album. The former leads with the same guitar lick as Cooke’s â€œThat’s Where It’s Atâ€ and is a slow gospel burner. Shelton sings with passion about walking side-by-side on her journey to redemption.

While she’s not the firecracker that Sharon Jones is, Naomi exudes a confidence that more than makes up for the lack of sass. After all, who says you have to have attitude to make a good album? With the opening chords on â€œWhat Is This,â€ which resemble the opening of Cooke classic â€œA Change Is Gonna Comeâ€ (which is also the album closer), you get a sense that you’ll be on a long but righteous road of glory. If you have a set of headphones for your walk, be sure to bring this album with you.

IF YOU DON’T KNOW HER BY NOW