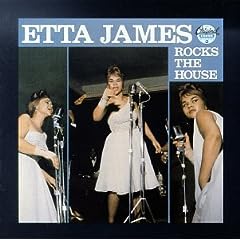 Etta James: Something’s Got A Hold On Me + Baby What You Want Me To Do
From Rocks The House (Argo, 1964)

If sound could create fire, then this is the album to have handy during a cold night’s camping trip. Part blues, part soul and all in your face, Etta James tapped another dimension in late September 1963 in Nashville. Chess producer/A&R man Ralph Bass, frustrated with trying to reach the soul summit with Etta in the studio, wanted to tap into her fiery side and decided to record a live album at the legendary New Era Club. What he got was unadulterated and unfiltered feeling.
CONTINUE READING…

Much like a James Brown live show, the MC announced it was Star Time. After a short intro, Etta growls, â€œOhhhhhh sometimes I get a feeling, yeah!!!â€ and launches into her 1962 hit, â€œSomething’s Got A Hold On Me.â€ Two-and-a-half wrenching minutes later, the jam begins. With vocals that knock you on your ass, it’s the band’s duty to keep the groove movin’ and get you on your feet. To hear her talk in between songs makes you do a double take as her speaking voice is thin and almost aw-shucks quiet. During song, she morphs into a beast in command of its territory. The crowd is obviously in a zone with Etta as evidenced by their frantic whoopin’, hollerin’, and whistling. Call and response is the theme of the night as virtually each and every song has the audience singing along with her.

The only 45 to be released from this set (Argo 5459) was the Jimmy Reed cover â€œBaby What You Want Me To Doâ€ with the flipside being Ray Charles’ â€œWhat’d I Say.â€ Guitarist David Walker leads the band into a slow blues burner on the Reed cover while Marion Wright keeps it true on the low end on bass. To hear what a matchstick she was, just listen to the original Jimmy Reed version.

No artist was too big to cover during this two-night extravaganza as she flipped B.B. King, Chess labelmate Muddy Waters, Barrett Strong, and even Brother Ray. While only three songs on this set weren’t covers (per the CD â€“ the original LP was only eight cuts deep), she made every song her own – just check out the scatting in â€œWoke Up This Morning.â€

If you want to get a glimpse of what it would have been like to see Etta tow the line of the devil’s blues and raising the Holy Spirit, then pick up Bear Family’s The !!!! Beat, Vol. 1 on DVD. Episode #2 features her performing â€œSomething’s Got A Hold On Meâ€ while Episode #3 shows her singing with numerous others on Ray Charles â€œWhat’d I Say.â€ If all you need are a few audible embers to light your fire, Rock The House can certainly do the trick.

Ski vs. Dr. Dre: Who Flipped It Better?