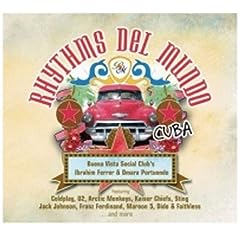 (Note: This review was originally written for NPR.org’s “Song of the Day.” It appeared on NPR’s website on November 21, 2006).

The idea behind Rhythms Del Mundo: Cuba is high-concept simplicity: Alt-rock meets the Buena Vista Social Club. Assorted ’80s and ‘90s rock songs and pop standards are remade within a Cuban aesthetic, though some songs are more like remixes — think Arctic Monkeys’ vigorous “Dancing Shoes,” done up with a descarga groove. Others are complete makeovers, such as the late legend Ibrahim Ferrer covering “As Time Goes By” in a classical son ballad style.

Given the conceit, it’s not surprising when the album leans toward artifice — imagine Coldplay’s “Clocks,” but with Chris Martin’s plaintive melody replaced by an upbeat but poorly fit muntono piano riff. However, at the other end of the spectrum is the album’s best song, El Lele de Los Van Van’s re-imagining of “High and Dry,” Radiohead’s hit song from The Bends.

It helps that the Radiohead original is a brilliant pop ballad to begin with, but the song also boasts a sparse arrangement that can be easily tinkered with without the result sounding forced or gimmicky. The Cuban remake remains tastefully minimalist, with a slowly paced Afro-Latin rhythm, a soft trumpet chorus and an acoustic piano, which replaces the guitar on the original. In contrast to the fragile falsetto that Thom Yorke brought to bear, El Lele approaches the vocals with a rich, throaty tenor, as sweet and dark as caramel. Though the vocal arrangement hews closely to Yorke’s, El Lele’s performance sounds so captivating on its own that until he reaches the distinctive climb of the chorus, it’s easy to forget this is a cover. Beautifully serene and affecting, El Lele de Los Van Van’s take on “High and Dry” achieves the best intentions behind the compilation: to create songs that sound both familiar and unique.

Speaking of NPR, I also reviewed Jay-Z new album for Morning Edition, which ran the same morning as the “Song of the Day” post.

Small correction: In the NPR review, it says that Jay retired two years ago when in fact, it was three. Man, time flies!

CAM’RON VS. JAY-Z: THE JUMP OFF