Settling in L.A. has been…ok. There’s been a little drama with the apartment itself – fleas, too many boxes, not enough space, and cotdamn people, we had 14,000 pounds of stuff to pack and unpack. Good gawd. That said, we really like the apartment – it gets this great cross-breeze where it feels like we’re eating outside even when we’re inside. And hey, I finally unpacked all my (non-hip-hop) records and shelved them today. Finally.

And in the process…I came upon this Cavaliers Unlimited. Here’s some backstory: for one, it’s a crazy obscure funk 45 out of Portland. DJ Shadow’s Calitex label actually reissued it last year. I happened to be talking to Shadow about it earlier in the spring, asking him a few questions about the 45 and he was saying, “yeah, there’s only a handful of known copies” (i.e. known = copies that are known to be in the hands of collectors) and then he paused and asked, “wait, don’t you have one of them?” My immediate response was, “are you kidding? Hell no!” In any case, I grabbed the reissue and had planned on blogging about it but the move happened, yada yada.

Ok, so fast-forward to earlier today. I’m going through my 45 boxes to find stuff to either record for Soul Sides or just get rid of and in the “C” section, lo and behold: I actually did own a copy. Now – first of all, it’s pretty f—ing scary when DJ Shadow knows your record collection better than you do. Second, for the life of me, I couldn’t remember where or when I bought this and it took me a few hours of rooting around in my email archives to remember – oh yeah, I got this off of Jumpjump.com back in 2000 for all of $10 because it was in such poor condition. Personally, by “poor,” I’d say it’s like VG- – definitely not mint-stock or anything but all things considered, it’s not that bad especially since it was recorded lo-fi originally (for the famed Century custom/private press label). I’m not saying of this to brag, “oh yeah, I got a 45 that only 6 people have” but seriously, I was kind of bugging out that I had this and straight up forgot about it. So hey, enjoy my copy, crackle and all.

As for the Humphrey – hey, it’s never a bad time to take a draught off the Cool-Aid Chemists and the song is obviously apropos. Funky L.A. indeed.

THE SIDEBAR #6: KEVIN HOWES ON THE NEW MOWEST ANTHOLOGY

Mary Lou Williams: In Touch With the Keys 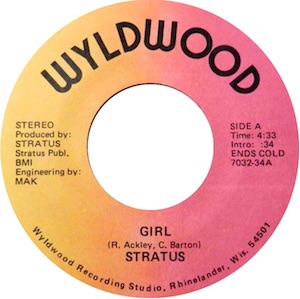