A few weeks ago I posted about Numero 25 being a book and 2LP set. Well, plans have changed as there has been a reshuffling of catalog numbers, and the results are even better than you can imagine.

The book and 2LP release has now been given a new catalog number as Numero 33. You can view a promo of it here with Ricky Allen’s â€œNo Better Time Than Nowâ€ as a musical backdrop. The coffee table book features a photo collection as shot by Michael Abramson of Chicago nightlife in the mid-70s. The exciting thing is that with a pre-order you can get a download of the music now (yes, NOW!) and your book will ship in September (the street date is in November). Also, the first 250 pre-orders from Numero’s site get a signed and hand-numbered print from the photographer as well as a bonus 45 (only 1000 pressed).

So where does that leave Numero 25? Oh, all they did was rescue 6 tracks that were crumbling from the reels of the sophomore 24 Carat Black album that has never seen the light of day. Stay tuned as we’ll be doing coverage closer to its release date (July 28). 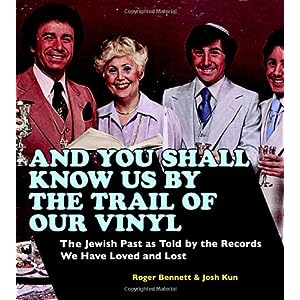 Bennet, Roger, and Josh Kun. And You Shall Know Us By the Trail of Our Vinyl (Crown, 2008)

I should have blogged about this prior to last night, when there was an event and book signing in Santa Monica around the above book but hey, you still have a few days to Hanukkah/Xmas/Kwanzaa to cop this tome.

I should first include the following disclaimer: Josh Kun, one of the co-authors, is one of my mentors and a good friend and I also appear in the book, having contribute a short essay on David Axelrod’s The Auction (see below). That conflict-of-interest alert aside, here’s some thoughts on this.

Trail of Our Vinyl is a different kind of album cover book. On the surface, it would seem to share much in common with books like Cocinando! or The Book of Hip Hop Cover Art – hundreds of album covers, interspersed with contextual essays. However, the point of divergence comes with the core purpose of the book, revealed in its subtitle: “The Jewish Past as Told by the Records We Have Loved and Lost.” This book is all about collective memories as encoded in records and thus the range of themes are sprawling and complex (like memories are). In essence, this is less a book about music than it is a book about Jewish American identity as told through music, and more specifically, made material in the form of LPs and their evocative covers.

Thematically then, the book has a very loose chronological organization but is far more based around particular areas of Jewish-ness, ranging from “Men’s Warehouse: The Changing Sartorial Styles of the Great Cantors” to “Go Down Moses: The Music of Black-Jewish Relations” to “The Sound of Suffering: Holocaust, Soviet Jewry, and Martyrdom on Vinyl” to “Stop Singing Our Songs: Non-Jewish Masters of the Jewish Melody.”

Each accompanying essay is less about the album covers depicted after and more about discussing slices of Jewish American history and/or cultural/community dynamics, all “documented” by the 400 or so album covers included therein. It’s a level of thought and engagement that’s considerably more sophisticated – but still quite readable – compared to similar books which tend to be more about chronicling music genres rather than the communities behind them.

However, like many album cover books, there isn’t as much discussion about album covers. The artwork is the obvious visual draw but though we get a few in-depth essays about specific albums or artists (such as what I contributed), a lot of these images lack context and that’s one thing I personally have always wanted more of – a discussion about how artists (or their labels) choose certain images or styles (this is something, for example, the Blue Note books do better, but again, not really on an LP by LP basis.

The grand thing about our internet age though is that the limitations a book places on that kind of in-depth discussions can be, instead, moved online and indeed, on the Trail of Our Vinyl blog, Bennett and Kun add those deeper anecdotes. (Be sure to check out the interview with Johnny Yune, Koraen American performer of Ose Shalom fame.

As you may guess, my two favorite sections were about cross-cultural adventures in Jewish music, namely the chapters on Black-Jewish relations and “Me Llamo Steinberg: The Jewish Latin Craze.” Part of me is just drawn to the long-standing kind of inter-ethnic/racial dialogues that are created through music and certainly, for Jewish American musicians, there is no shortage of examples to point to.

Orchestra Harlow: Horsin’ Up
From Presenta A Ismael Miranda (Fania, 1968)

We start with the El Judio Maravilloso, the “marvelous jew” Larry Harlow whom I wrote about a few months back. Undoubtedly the most influential Latin artist of Jewish descent in the NY Latin scene of the ’60s and ’70s, Harlow seemed to be one of those born-again Puerto Ricans who were such a vital part of the Nuyorican Latin scene (you can put Joe Bataan and possibly Jimmy Castor in that same category). “Horsin’ Up” seemed like an apt selection given its own cross-cultural references – the song is a boogaloo-ed mash-up between Archie Bell’s “Tighten Up” and Cliff Nobles’ “The Horse“. I should add: this is a strange album too since it was recorded in 1968, right in the middle of Harlow’s (reluctant) boogaloo period but Fania didn’t release the album until 1972 (go figure).

Apart from Harlow, the other major Jewish artist in the same circles was smooth singing Harvey Averne who found modest success recording for Atlantic, Fania and Averne’s own Coco label. Averne’s Viva Soul has long been a favorite of mine (and his self-titled LP on Fania is another one for a later post), especially “You’re No Good” (which I blogged about way back in 2004) which benefits beautifully from the use of the female back-up singers and Averne’s own rich vocals.

Lastly, I included the title song from David Axelrod’s The Auction, which, like almost all of Axelrod’s 70s albums, was a concept LP. This one was in reference to American slavery (the “auction was not in reference to eBay) and this is what I had to say about it in Trail of Our Vinyl:

“the slick, funky sound of Adderley’s band gives way to the gravely voice of lead Billie Barnum who sings of “young girls…helpless in their shame” while soloist Gwendolyn Owens speaks of “little children sold…while masters traded them for gold.” It’s a heavy, bleak sentiment – oddly contrasted against Adderley’s gliding grooves – but it’s also the kind of eclectic and provocative work that Axelrod excelled at.”

And since this is a book of album covers, I picked out a few of my favorites: I went for images that appealed to me visually and/or had an intriguing comment to make on visuals alone. For example, The Immortals album by Eddie Cantor and Al Jolson is very striking for its simple but unambiguous reference of blackface – a popular convention amongst the group of vaudeville singers that included Cantor and Jolson and a practice whose inherent racism was also complicated by its popularity amongst immigrant Europeans.

Speaking of duality, the cover of Two Sides of Pinchik captures the cantor’s crossed identities perfectly – one as the religious figure, one as a quasi-pop hopeful. As Kun joked at this week’s talk, which identity Pinchik chose came with its own hat.

The Star of David housing a raised fist is the sole image on Rabbi Meir Kahane’s minimalist spoken word album, a stark but loaded exercise in saying less with more, design-wise.

Lastly, how can you not like the groovy cover for Israel Hit Parade 2? Party on dude!

I’ve taken an inordinate amount of time, getting around to writing this post, but don’t confuse my lateness with disinterest. The tale of Mingering Mike is one of the most incredible stories about art, music, records and obsession that I’ve ever heard about and I’m proud to have been witness to part of it.

Flashback to late 2003 when two Washington D.C. record collectors found a stash of records at a flea market. These were albums they had never seen before and the reason they had never seen them before is because these records – the sleeves, the covers, the actual record themselves – were all made by hand out of cardboard.

Just think on that for a moment. Someone created not one, not two, but an entire record collection, down to the fake, painted on cardboard “vinyl”, out of his imagination. We’re talking nearly 100 (if not more) LPs, 45s, etc. It seriously boggles the mind. It’s also astounding that this cache of art was discovered, relatively intact, before it ended up being dispersed or even worse, destroyed.

One of the first things these collectors did (lead by Dori Hadar) was scan and post images from the collection to Soulstrut which is where I first learned of it and began to put up my own posts (on the now-defunct Poplife blog). Second thing was that Hadar – who, as fate would have it, works as a private investigator – was figure out who the hell “Mingering Mike,” the artist on all these records, was…if he was still alive…and what the hell inspired him to do this. Hadar, in short order, found Mike, alive and well, and from there, the journey took a course that’s lead to media stories, museum exhibitions, and a book:

I can’t do justice to how incredibly amazing this story is but as it is: there’s plenty of places that have covered it:

I realize, of late, there have been a few things I’ve told people to absolutely, positively, pick up:
The Betty Davis albums,
Twinight’s Lunar Rotation, my, um, CD…but you have to add the Mingering Mike book to that list too. Essential.

The Betty Davis CD contest fell rather flat so I’ll try to simplify things in order to win the Mingering Mike book:

Write down the name of all the record labels represented in the new Soul Sides banner.

Send your reply to soulsides@gmail.com. The winner will be selected, at random, from all correct entries that get all eight labels correct. You have until the end of next week to get your guesses in.

In the meantime, make sure you check out the Mingering Mike website.